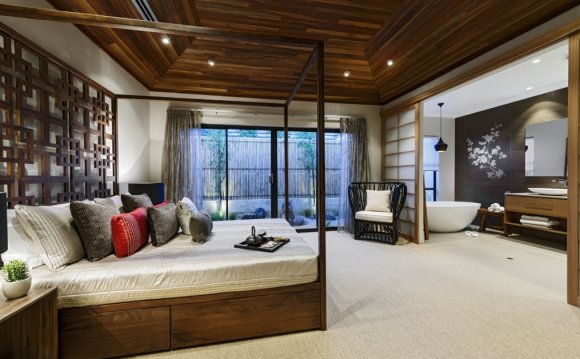 Designer Ken Fulk replaced one big coffee table with two African drum tables in front of the Ralph Lauren sofa in the living room of a California cottage. "They're better for traffic flow than one of those huge knee-knockers, and easily moved to wherever we need them, " says Fulk. The galvanized steel French bistro chairs around the vintage dining table are from the Sundance catalog.

Designer Tom Stringer calls the rehab of this northern Michigan lake cottage Renovation-Lite, because he consciously avoided overhauling its charming eccentricities. A coffee table designed by Stringer holds stacks of old National Geographics. "They added the perfect yellow punch. They're so classic — just like blue and white. But we also knew they'd be great rainy-day reading, " he says.

Designer Myra Hoefer and Gina Gattuso relaxed formal pieces of furniture, like these Louis XVI chairs, by upholstering them in raffia with natural muslin cushions. Featured in June 2006 issue.

In this Nantucket cottage, the solid blue fabric on the chairs, Romo's Linara, "is practical for sticky little hands because it has a lot of texture, a lot of weaving, " says designer T. Keller Donovan. Table and chairs from John Andrew. Featured in May 2008 issue.

For the dining room of an East Hampton cottage, designer Tom Scheerer created wraparound scenic wallpaper by enlarging a Currier & Ives print of Newport Harbor. In the romantic breakfast area of the room, leather cushions add height to a linen-covered Empire settee to match antique chairs pulled up to the custom table. Featured in August 2008 issue.