Did the Romans invent the arch 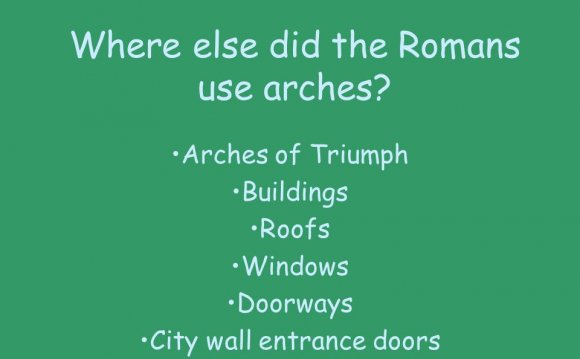 THE ARCHITECTURE OF PUBLIC BUILDINGS

The Romans did not invent the arch, but their development of it enabled them fully to exploit their penchant for resolving improbable situations by vast expense of labour.

The Romans took from the Greeks, based on different forms of column and the capital which surmounted it, and added a hybrid of their own, known as Composite. That they could indulge their architectural ambitions was due to the indubitably Roman invention of concrete. Its basis was pozzolana, a chocolate-coloured volcanic earth originally found near the Greek settlement of Puteoli, and subsequently discovered in vast quantities around Rome. (From Helen and Richard Leacroft, The Buildings of Ancient Rome, Brockhampton Press 1969)

Pozzolana was used to make mortar and also, when mixed with lime and strengthening materials such as chips of rock and broken brick, concrete. Judicious use of bricks and concrete together enabled massive, permanent structures to be built. Once concrete had taken the place of rubble as the filling of a wall, it was possible to use irregularly shaped stones as facing, with courses of brick to bind it. This was known as opus incertum. With opus reticulatum square-based pyramids of stone were inserted with the heads facing inwards. A further development was opus testaceum, in which triangular baked bricks were used. Their command of materials and techniques enabled the Romans to construct circular temples, the most spectacular of which is the Pantheon, rebuilt between AD 120 and 124 in the reign of the emperor Hadrian.

Cutaway drawing of the Pantheon, showing the inside of the building. The hemispherical dome is 43.28 metres in diameter, and if completed would exactly touch the ground. The only light falls through an eight-metre wide gap in the top (see note in right hand column). (From Helen and Richard Leacroft, The Buildings of Ancient Rome, Brockhampton Press 1969)

The remains of Roman buildings are a guide to the enormous areas which some of them covered. The main block of the baths of Caracalla to the south-east of the city, which could accommodate 1600 bathers at a time, was 216 by 112 metres.The baths of Diocletian, completed in about AD 305, could accommodate twice as many. Roman architects were less concerned with external appearances than with the creation of inner space, which the dome, where it was employed, enhanced.

In their construction of public baths as luxury-cum-cultural leisure and sports centres, the Romans combined their passion for opulence with their flair for hydraulics. Did the Romans invent Christmas?

What did the Romans invent?