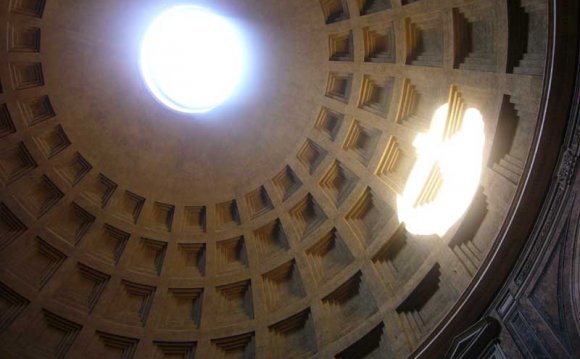 In ancient Rome, the domus was the type of house occupied by the upper classes and some wealthy freedmen during the Republican and Imperial eras. It comes from the Ancient Greek word domi meaning structure since it was the standard type of housing in Ancient Greece. It could be found in almost all the major cities throughout the Roman territories. The modern English word domestic comes from Latin domesticus, which is derived from the word domus.

The word dom in modern Slavic languages means "home" and is a cognate of the Latin word, going back to Proto-Indo-European. Along with a domus in the city, many of the richest families of ancient Rome also owned a separate country house known as a villa. While many chose to live primarily, or even exclusively, in their villas, these homes were generally much grander in scale and on larger acres of land due to more space outside the walled and fortified city.

The elite classes of Roman society constructed their residences with elaborate marble decorations, inlaid marble paneling, door jambs and columns as well as expensive paintings and frescoes. Many poor and lower middle class Romans lived in crowded, dirty and mostly rundown rental apartments, known as insulae. These multi-level apartment blocks were built as high and tightly together as possible and held far less status and convenience than the private homes of the prosperous. The homes of the early Etruscans, predecessors of the Romans, were simple, even for the wealthy or ruling classes. They were small familiar huts constructed on the axial plan of a central hall with an open skylight. It is believed that the Temple of Vesta was, in form, copied from the these early dwellings because the worship of Vesta began in individual homes. The huts were probably made of mud and wood with thatched roofs and a centre opening for the hearth's smoke to escape. This could have been the beginnings of the atrium, which was common in later homes. As Rome became more and more prosperous from trade and conquest, the homes of the wealthy increased in both size and luxury emulating both the Etruscan atrium house and Hellenistic peristyle house.

The domus included multiple rooms, indoor courtyards, gardens and beautifully painted walls that were elaborately laid out. The vestibulum (entrance hall) led into a large central hall: the atrium, which was the focal point of the domus and contained a statue of an altar to the household gods. Leading off the Atrium were cubicula (bedrooms), a dining room triclinium where guests could recline on couches and eat dinner whilst reclining, a tablinum (living room or study) and tabernae (shops on the outside, facing the street). In cities throughout the Roman Empire, wealthy homeowners lived in buildings with few exterior windows. Glass windows weren't readily available: glass production was in its infancy. Thus a wealthy Roman citizen lived in a large house separated into two parts, and linked together through the tablinum or study or by a small passageway.

To protect the family from intruders, it would not face the streets, only its entrance providing more room for living spaces and gardens behind.

Surrounding the atrium were arranged the master's families' main rooms: the small cubicula or bedrooms, the tablinum or study, and the triclinium or dining-room. Roman homes were like Greek homes. Only two objects were present in the atrium of Caecilius in Pompeii: a small bronze box that stored precious family items and the lararium, a small shrine to the household gods, the Lares.

In the master bedroom was a small wooden bed and couch which usually consisted of some slight padding. As the domus developed, the tablinum took on a role similar to that of the study. In each of the other bedrooms there was usually just a bed. The triclinium had three couches surrounding a table. The triclinium often was similar in size to the master bedroom. The study was used as a passageway. If the master of the house was a banker or merchant the study often was larger because of the greater need for materials. Roman houses lay on an axis, so that a visitor was provided with a view through the fauces, atrium, and tablinum to the peristyle.

A schematic of a domus

Vestibulum (Fauces) The vestibulum was the main entryway hall of the Roman Domus. It is usually only seen in grander structures, however many urban homes had shops or rental space directly off the streets with the front door between. The vestibulum would run the length of these front Tabernae shops. This created security by keeping the main portion of the domus off the street. In homes that did not have spaces for let in front, either rooms or a closed area would still be separated by a separate vestibulum. Most Famous Modern Architectural Buildings Around the World