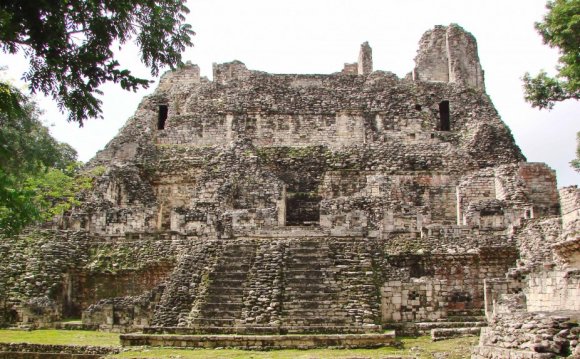 The earliest Maya settlements date to around 1800 B.C., or the beginning of what is called the Preclassic or Formative Period. The earliest Maya were agricultural, growing crops such as corn (maize), beans, squash and cassava (manioc). During the Middle Preclassic Period, which lasted until about 300 B.C., Maya farmers began to expand their presence both in the highland and lowland regions. The Middle Preclassic Period also saw the rise of the first major Mesoamerican civilization, the Olmecs. Like other Mesamerican peoples, such as the Zapotec, Totonac, Teotihuacán and Aztec, the Maya derived a number of religious and cultural traits–as well as their number system and their famous calendar–from the Olmec.

In addition to agriculture, the Preclassic Maya also displayed more advanced cultural traits like pyramid-building, city construction and the inscribing of stone monuments.

The Late Preclassic city of Mirador, in the northern Peten, was one of the greatest cities ever built in the pre-Columbian Americas. Its size dwarfed the Classic Maya capital of Tikal, and its existence proves that the Maya flourished centuries before the Classic Period.

The Classic Period, which began around A.D. 250, was the golden age of the Maya Empire. Classic Maya civilization grew to some 40 cities, including Tikal, Uaxactún, Copán, Bonampak, Dos Pilas, Calakmul, Palenque and Río Bec; each city held a population of between 5, 000 and 50, 000 people. At its peak, the Maya population may have reached 2, 000, 000.

Excavations of Maya sites have unearthed plazas, palaces, temples and pyramids, as well as courts for playing the ball games that were ritually and politically significant to Maya culture. Maya cities were surrounded and supported by a large population of farmers. Though the Maya practiced a primitive type of “slash-and-burn” agriculture, they also displayed evidence of more advanced farming methods, such as irrigation and terracing.

The Maya were deeply religious, and worshiped various gods related to nature, including the gods of the sun, the moon, rain and corn. At the top of Maya society were the kings, or “kuhul ajaw” (holy lords), who claimed to be related to gods and followed a hereditary succession. They were thought to serve as mediators between the gods and people on earth, and performed the elaborate religious ceremonies and rituals so important to the Maya culture.

The Classic Maya built many of their temples and palaces in a stepped pyramid shape, decorating them with elaborate reliefs and inscriptions. These structures have earned the Maya their reputation as the great artists of Mesoamerica. Guided by their religious ritual, the Maya also made significant advances in mathematics and astronomy, including the use of the zero and the development of a complex calendar system based on 365 days. Though early researchers concluded that the Maya were a peaceful society of priests and scribes, later evidence–including a thorough examination of the artwork and inscriptions on their temple walls–showed the less peaceful side of Maya culture, including the war between rival Mayan city-states and the importance of torture and human sacrifice to their religious ritual.

Serious exploration of Classic Maya sites began in the 1830s. By the early to mid-20th century, a small portion of their system of hieroglyph writing had been deciphered, and more about their history and culture became known. Most of what historians know about the Maya comes from what remains of their architecture and art, including stone carvings and inscriptions on their buildings and monuments. The Maya also made paper from tree bark and wrote in books made from this paper, known as codices; four of these codices are known to have survived.

Life in the Rainforest

One of the many intriguing things about the Maya was their ability to build a great civilization in a tropical rainforest climate. Traditionally, ancient peoples had flourished in drier climates, where the centralized management of water resources (through irrigation and other techniques) formed the basis of society. (This was the case for the Teotihuacan of highland Mexico, contemporaries of the Classic Maya.) In the southern Maya lowlands, however, there were few navigable rivers for trade and transport, as well as no obvious need for an irrigation system.

By the late 20th century, researchers had concluded that the climate of the lowlands was in fact quite environmentally diverse. Though foreign invaders were disappointed by the region’s relative lack of silver and gold, the Maya took advantage of the area’s many natural resources, including limestone (for construction), the volcanic rock obsidian (for tools and weapons) and salt. The environment also held other treasures for the Maya, including jade, quetzal feathers (used to decorate the elaborate costumes of Maya nobility) and marine shells, which were used as trumpets in ceremonies and warfare.

Mysterious Decline of the Maya

From the late eighth through the end of the ninth century, something unknown happened to shake the Maya civilization to its foundations. One by one, the Classic cities in the southern lowlands were abandoned, and by A.D. 900, Maya civilization in that region had collapsed. The reason for this mysterious decline is unknown, though scholars have developed several competing theories.