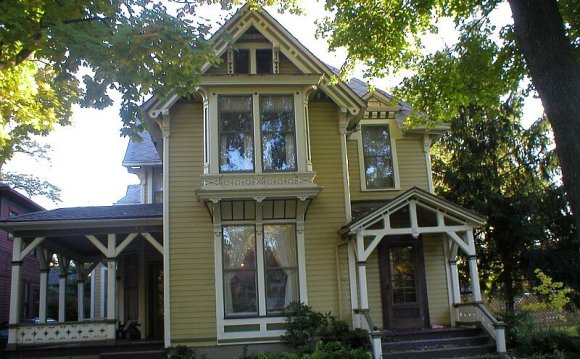 Of the many architectural styles prevalent in the United States during the Victorian era, the Stick Style was the most expressive of a building’s underlying structure. Decorative wood trim, called stick work, was applied to the exterior to emphasize the basic wood frame structure underneath. Popular between 1860 and 1890 and built predominantly in wood, there are few pure examples of the style remaining in urban areas. However, many fine examples of Stick Style may be hidden beneath slipcovers of aluminum, vinyl, stucco, or asbestos shingle installed in an attempt to modernize the appearance of an older home. The Stick Style evolved from the work of architect Gervase Wheeler, an English immigrant and author of Rural Homes or, Sketches of Houses Suited to American Country Life, an influential treatise on residential architecture first published in 1851. Over several years and eight editions, the book popularized Wheeler’s ideas on design, particularly his notion that buildings should be structurally truthful.

Wheeler was particularly influenced by Tudor-style construction, with its exposed heavy oak framing and half-timbering, the consummate expression of structural honesty. His own creations, however, were more subtle, using decorated faccades to express the structural wood framing that lay beneath the surface. The purest form of Stick Style can best be appreciated with a visit to the Emlen Physick House (1879) at 1048 Washington Street in historic Cape May, New Jersey. This beautiful example has most of the Stick-Style elements on display, for example, steeply gabled roofs, tall proportions, and decorative structural overlay. Unusually large brackets form curved diagonal braces along the porch. Extended rafters with brackets support the overhanging roofs, and applied trim frames windows and surrounds panels of diagonal bead board. Large sash windows are fit into the rectangular pattern of the façade, and decorative brickwork panels are inset into large brick chimneys.