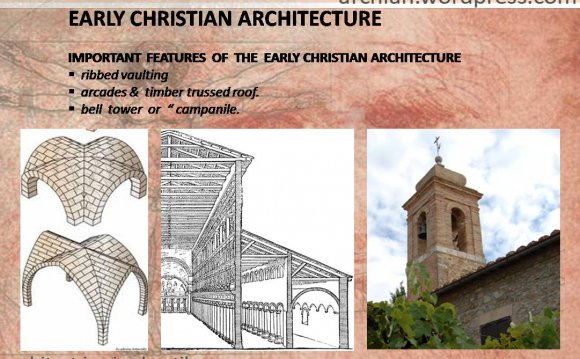 The Church of the Holy Sepulchre in Jerusalem was constructed by Roman Emperor Constantine I's mother, Helena, on the supposed site of Jesus' tomb.

Christianity could be a dangerous calling during the faith's early years. Prior to the fourth century, Christian rites were often conducted discretely in homes or "house churches" rather than in dedicated public structures.

When Christian churches did begin to appear they instilled the religion with a newfound prominence and a sense of permanence. The architecture and imagery of older faiths was often modified to express uniquely Christian beliefs. For example, depictions of angels reflected the Greek winged goddess Nike.

Such commingling can be seen at Dura Europos—a border town on the banks of the Euphrates in what is today Syria. Here, during the town's second and third century Roman period, altars to pagan gods, Jewish synagogues, and perhaps the earliest Christian church all coexisted.

As Christianity grew in public esteem, some churches and monasteries were created to publicly memorialize events from the life of Jesus. Jerusalem's Church of the Holy Sepulcher is built on the traditional site of both the Crucifixion and the adjacent tomb (or sepulcher) from which Jesus is believed to have risen from the dead. Constantine I first completed a church on this site around A.D. 336. By doing so, he erected a permanent monument at what was believed to be the physical location of Christianity's seminal events. Worship at the site may have begun soon after Jesus' death, assuming followers honored Jesus' physical resting place, as they would have in the Jewish tradition.

The church has been razed and rebuilt several times throughout Jerusalem's contentious history. Much of the present structure dates from the early 19th century.

Architecture also reflected the faith's growing social and political prominence. In A.D. 313 Emperor Constantine I donated a royal palace, known as the Lateran, as a residence for the Bishop of Rome. The installment of Christian leaders in such splendor surely had strong symbolic importance for Rome's citizens. A succession of popes inhabited this palace for about a thousand years.

This basilica was long the center of Christian life in the city and still retains its distinction as the Cathedral of Rome—though the original structure has been damaged and reconstructed several times over the centuries.