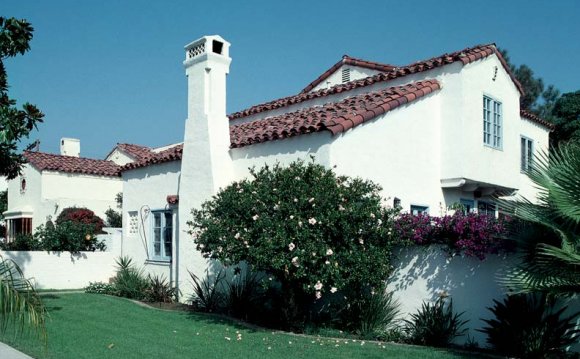 It's easy to spot old French buildings in the United States—they're distinctive and not hard to find once you know where to look. But learning to see beyond (and especially within) the familiar Gulf Coast or Creole raised cottage is a bit trickier.

Excellent examples of French architecture survive in present-day Louisiana and Mississippi, but there are many others in Missouri, Illinois, and Michigan, too. Vernacular French houses in the New World were, as the saying goes, oddly alike, yet different somehow. That's because French architecture made its way to the United States from several different directions—from the south via the French West Indies, from the north by way of French Canada, and, least important in numbers and impact on the American landscape, directly from France. (The latter were often formal, high-style examples, such as New Orleans' 1745 Ursuline Convent or the long-demolished Robert Morris House in Philadelphia, designed by Pierre-Charles L'Enfant, the architect famous for planning the city of Washington, D.C.) Not surprisingly, America's French buildings also varied depending on where they were built—in hot and wet climates, or cold and damp ones.

Historic Influences
France's priorities in the New World were different from those of their 17th- and 18th-century rivals, Spain and England. The French left the quest for gold mostly to the Spaniards. The English were welcome to settle their own colonies with planters and farmers—as long as they stayed away from prime French fur-hunting and trading routes.

For the French, the issue was always trade, and consequently their houses were influenced by people and traditions encountered in prime trading locales. They forged a (mostly) friendly relationship with Native American tribes and allowed the Indians to roam their customary hunting grounds, encouraging them to bring their rich harvest of pelts to French settlements on the Missouri, Mississippi, Illinois, and Ohio Rivers for shipment to the European market.

In the West Indies, French sugar planters learned from slaves about African building methods, such as deep, encircling porches that provided shade and shelter for buildings and inhabitants alike. They quickly came to appreciate the usefulness of piers that lifted buildings above floods and helped with vital ventilation. In the humid, hot, and often water-logged southern reaches of French Louisiana, these were valuable architectural ideas indeed.

French buildings in North America were mostly modeled after the little buildings constructed in French Canadian and West Indian colonies. In Europe, the French had long used heavy timber framing for steep-roofed, half-timbered colombage houses. With variations, such old-country techniques proved valuable in Canada, where snow and ice posed big problems, and, with further variations, equally helpful in combating the intense heat and rain that plagued the southern regions of the New World.

Thus, when they built in North America—almost always along rivers or other waterfronts that offered transportation opportunities for their commercial enterprises—the French drew on a mixed bag of traditions: European, African, and probably American Indian as well. They used native materials—locust, cedar, or cypress in the South—and whatever filling materials were locally available.

This restored Creole cottage, with its paired front doors, sits in Bay St. Louis, Mississippi, an early French settlement on the Gulf of Mexico. Photo courtesy of the Hancock County Historical Society

House Details
In general, the early French house in America was a rather simple affair—rectangular in shape, one or two rooms deep, one and a half or two stories high, and usually containing no more than three rooms total per floor. The houses sat close to the ground or were raised a half-story to allow for air circulation around and under the building.

The floor plan was simple, too: No interior halls or stairways cluttered up the space. Access was handled by the ever-useful galerie, an outdoor living space offering multiple functions: living rooms, reception areas, offices, and even—when portions were walled in or curtained off—bedrooms. Galeries had separate doors to every room and often contained exterior staircases to the second floors. A centrally located chimney heated the entire house.

French doors (mais oui!) opened to the interior spaces, and casement windows, artfully aligned on opposite sides of the house, welcomed any passing breeze and encouraged cross-ventilation. The persistent use of casement windows rather than the double-hung sash favored by the English is one of the most prominent indicators of a dwelling's French origins.

For most people, the raised cottage is the image most strongly identified with the French house in America. It was certainly the most persistent house type used in French areas—even though most of the ones we see today date from the later Spanish or American eras.

Eventually, even large plantation houses in Louisiana embraced the twin concepts of the raised basement and encircling galerie. In keeping with their status, however, these big houses were raised a full story above the ground and often supplied with elegantly columned two-story galleries. The ground floor held kitchens and service areas, while the family enjoyed the leisurely social life of the porch. Louisiana's famed River Road sugar plantations and houses in the Cane River National Heritage Area around Natchitoches offer ample evidence of the charm of such arrangements.

Steeply pitched hipped roofs, shingled on four sides, were universal in French houses from Quebec to New Orleans, as they easily shed both snow and rain. Single-slope roofs were common in northern areas, but elsewhere, spreading, double-pitched roofs (which look like a flat-topped witch's hat with a broad brim) both accommodated the wraparound galeries and allowed high ceilings. While dormers are frequently found in the roofs, most are later additions.

The 13 Colonies: Life in Early America