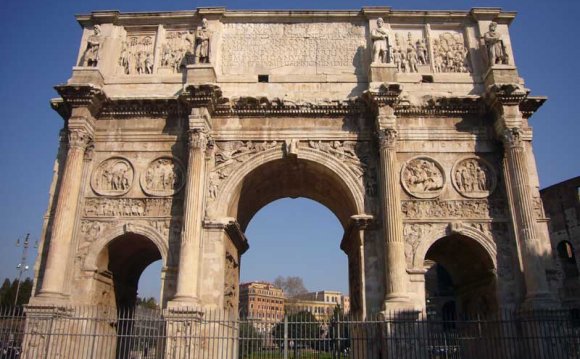 Most know Thomas Jefferson as the author of the Declaration of Independence, third President of the United States, and purchaser of the Louisiana Territory. But, not many know of his influence on the architecture of America.

Have you ever wondered why the original buildings in Washington D. C. look like ancient temples with pillars and domes? They were erected because of Jefferson’s vision for the United States and a new American culture.

Jefferson wanted the founding of the United States to be a complete break from the past and English influences. If this new country was to succeed, it had to develop a culture that was entirely American. The people had to think of themselves as Americans, not colonial Englishmen. That is why Jefferson advocated a new form of government, a different currency and a novel measuring system, distinct from the British. (He was not alone. Noah Webster sought to codify “American” English in his dictionary.) He saw architecture as an artistic declaration that the United States was unique and not European.

The inspirations for Jefferson’s political and architectural beliefs were the classic civilizations of ancient Greece and Rome. This is not surprising, since he was raised in The “Age of Reason”. The “Age of Reason” idealized those eras and saw them as an alternative to the monarchical societies of Europe. As a child of the “Age of Reason” Jefferson was drawn to the symmetry, clean lines and mathematical preciseness of Greek and Roman buildings. This was in direct opposition to the ornate, Rococo buildings being constructed in Europe at the time.

Jefferson was enraptured by the classical world. He could read ancientGreek and Latin. He was an expert in their histories, political systems, literature and architecture. And, he considered them as the basis for establishing a new American culture. He desired to utilize his knowledge of the ancient world to establish an architectural declaration of independence.

Jefferson was well prepared for the task. He was more than just a dilettante. He studied architecture for more than forty years and made himself a master of architectural drawing far superior than anyone else in America at the time.

Jefferson probably had the largest architectural library in the United States. Some of the works that he possessed, and that directed him, were written by Palladio, Le Roy, Freart and Desgodet. Andrea Palladio had a great influence on Jefferson. The formality, restraint and mathematical proportions of Palladio designs, which were inspired by ancient classical structures, appealed to Jefferson.

Jefferson, while Minister to France, was able to visit and study many of these ancient structures in France, England, Germany, the Low Countries and Italy. His descriptions of these monuments, in his daily account books, are the most passionate statements the staid Jefferson every wrote, even to women. At Nimes, viewing the Maison Quarree, he stated, “I gaze whole hours at the Maison Quarree, like a lover at his mistress”. And, in Paris, “I was violently smitten with the Hotel de Salm”. He would utilize these visits as inspirations for future structures he would design in the United States.

Jefferson had a laboratory to experiment with his ideas in developing a unique form of American architecture; his own home, Monticello. In 1767 he purchased a small mountain (Monticello means ëlittle mountain’ in Italian) rising above his birthplace, Shadwell. He began construction that year, a process that would continue throughout most of his life. He rebuild Monticello several times.

Fiske Kimball in “Thomas Jefferson and the Arts” writes of his first efforts:

Deep in books on architecture, of which he already owned a number, he gave his preference from the start to that of Palladio, with its appeal to the lawfulness of nature, to the harmony of mathematical proportions. Making himself a master of architectural drawing to a degree quite beyond the skill of any Colonial builders or amateurs down to this time, he designed a house with Palladian porticoes of an academic correctness new in the southern Colonies. By a genial adaptation to his mountain site of Palladio’s schemes of colonnade service wings, which he depressed below terraces, he gave his house an uninterrupted sweep of the superb panorama of plain, of valley, and of mountain range.

Through its alterations, Monticello evolved from an ancient Greek, Palladian style to a structure that was more Roman. When he retired as Secretary of State, in 1793, he undertook another remodeling of Monticello. The attics were pulled down to give the effect of a single story as in Roman houses, and a Roman dome was added over the salon as in the Hotel de Salm. Karl Lehmann in Thomas

An thus it was only a seeming paradox that Jefferson immensely preferred Greek to Latin language and poetry, while in architecture he gave the palm to the Romans. The same longing for copiousness and ductility in imagination directed the Hellenist Jefferson as reader and the Romanist Jefferson as an architect.

Architecture in PA based off of Rome

Experience an Ancient Roman Villa in the Heart of Malibu