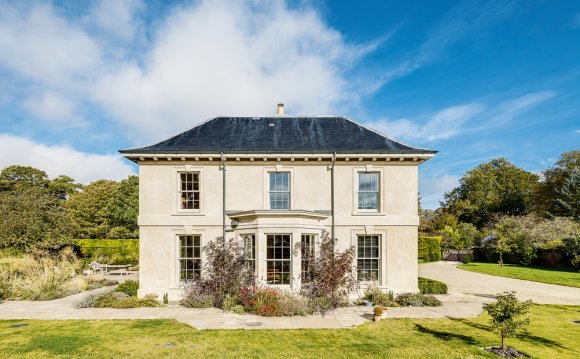 Our relentless enthusiasm for the era is captured by the Georgian Group Architectural Awards 2015, which were held this week, and sponsored by Savills.

Belmont, the salmon-coloured Landmark Trust villa in Lyme Regis, Dorset, built in the late 18th century by Samuel Coade, won first prize for The Restoration of a Georgian Building in an Urban Setting, with the Felton Park Glasshouse – a Grade II listed greenhouse and potting shed in Northumberland – coming a close second. Croome Park, the National Trust site in Worcestershire, bagged the prize for restoration of a Georgian Garden or Grounds, for the work done on its Capability Brown landscape. But the awards, now in their 13th year, do not just recognise restored piles.

Paul Steggall – who works as a headhunter in the City – has built a four-bedroom detached house where every brick pays tribute to the Georgian design legacy.

Bighton Grange, near Winchester, won New Building in the Classical Tradition, quite an accolade considering Steggall had not set out to build a house, let alone a Georgian one, when he started his search for a second home in 2010.

Having seen a few properties – none without a compromise of some kind – and in no rush, Steggall chanced upon the work of modern-day architect George Saumarez Smith in a magazine. “We liked his drawings, and then began to think about the possibility of building a house, ” he says. Steggall and his wife found a plot just outside Winchester and four years later they moved in.

Bighton Grange is typical of a home built in the Regency period – which fell at the end of the Georgian era. It has light oak floors, shuttered windows and is not heavily ornate.

“It’s an example of how you can build a house for modern day living whilst still maintaining an architectural merit, ” says Holborow.

With a name like Bighton Grange, you may expect a rambling old house with a warren of cold corridors. But the space inside has been used efficiently: there are four bedrooms, one each corner of the house, one large, open plan kitchen and living room, plus a large entrance hall that can double up as a dining area.

“We didn’t want a 'Christmas room’ or one of those rooms kept for special events, ” Steggall says, “or to end up with more bedrooms than we need.”

The upstairs hallway is a more of a gallery, and eight feet wide. “It is in itself a room. The house uses central areas, and I’d rather have that than another two bedrooms that require furniture.” One house with far more rooms than people is Wotton House in Buckinghamshire, winner of the award for The Restoration of a Georgian Interior.

The former diplomat David Gladstone and his wife April inherited the property in 1998 after her mother, Elaine Brunner, died.

Originally built by an unknown architect in 1704 for the Grenville family, the design reflected that of Buckingham Palace.

Fire struck in October 1820, and Richard Grenville, the 2nd Marquess of Buckingham, commissioned Sir John Soane to replace the interior. With these repairs Soane created a tribune, a dramatic internal space rising through several floors, with a curved staircase at its core.

Brunner bought Wotton for £6, 000 around 140 years later, saving it from demolition at a time when thousands of country homes were being demolished or given to the National Trust. Brunner and her architect Donald Insall restored almost all of the house but didn’t touch the staircase.

It is this feature that the Gladstones decided to restore and, with the architect Ptolemy Dean, they submitted a planning application in 2007.

Now completed, “you could easily walk into that space and believe that’s how it was done by Soane all those years ago, ” Holborow says.