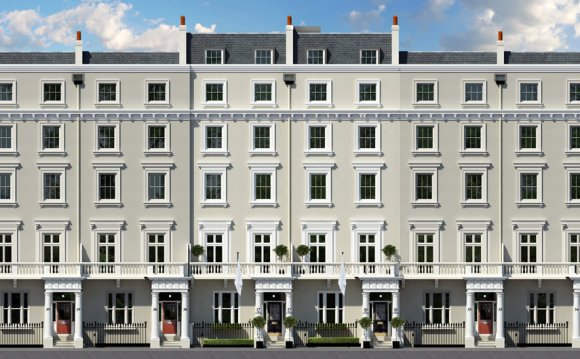 Throughout the 17th century, London houses had been susceptible to big fires that swept through narrow, twisting lanes in the city’s center and houses made of timber. A series of Rebuilding Acts specifying building construction followed the Great Fire of 1666 that destroyed over 14, 000 houses. A rise in population generated demand for housing, encouraging land owner to develop large tracts of land. The Building Act of 1774 prescribed how houses were to be built. The act specified the use of stone or brick and determined the width of the street, the size of the houses, floor to ceiling heights, and the layout of the houses. It also defined the four types of houses that could be built in London. Each of these types were standardized and followed strict building guidelines:

First Rate House: Worth over £850 per year in ground rent and occupied over 900 square feet of space. These houses faced streets and lanes.

Second Rate Houses: Worth between £350 and £850 in ground rent and occupied 500-900 square feet of floor space. They faced streets, lanes of note, and the RiverThames.

Third Rate Houses: A smaller house worth around £150-£300 and occupied 350-500 square feet. They faced principal streets.

Fourth Rate House: Worth less than £150 per year in ground rent and occupied less then 350 square feet. These houses stood in their own ground.

About ground rent:
Land owners improved their land by laying out roads and services. They then charged rent on this land. Housing developers (landlords) would build spec houses on the improved land and generate an income from leaseholders by collecting rent. Sometimes the land owner and the house landlord were the same person. These people were usually owners of great estates, which were better managed and the most sought after. Original leases were for as little as 33 years, but by the end of the Georgian era the length of time for many leases was increased to 99 years.

Curiously, the people who paid rent on large houses belonged to the nobility or gentry or prosperous merchants. While they did not own the houses they lived in, they received enormous incomes from their properties and businesses.