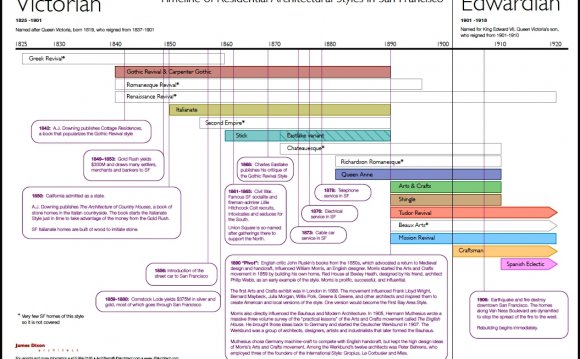 Eastlake is named after Charles L. Eastlake (1833-1906), an English architect who wrote Hints on Household Taste in Furniture, Upholstery, and Other Details, published in 1868. The book was reprinted in America in 1872 and became so popular that it required six editions within eleven years.

In his book, Eastlake promotes a peculiar kind of furniture and interior decoration that was angular, notched and carved, and deliberately opposed to the curved shapes of French Baroque Revival Styles such as the Second Empire. Traditionally, furniture makers imitated architectural forms, but Eastlake reversed this process. Eastlake houses had architectural ornamentation that had copied the furniture inside the house.

He made no furniture himself, his designs being produced by professional cabinet makers.

It was not only the custom designers who were inspired by Eastlake's ideas. The manufacturers of the machine-made furniture which Eastlake deplored also copied the Eastlake style as it was illustrated in his book.

Eastlake style became a kind of catchall term meaning different things to different people. Eastlake himself commenting on his influence in the United States, said, "I find American tradesmen continually advertising what they are pleased to call Eastlake furniture, the production of which I have had nothing whatever to do, and for the taste of which I should be very sorry to be considered responsible."

Henry Hobson Richardson, an American architect, was one of the foremost proponents of the Eastlake style in the United States. The furniture he designed for the Woburn Public Library and the North Eastern Library in Massachusetts are very similar to pieces which appear in the illustrations to "Hints on Household Taste."

Although Queen Anne and Stick styles sometimes include Eastlake porches, entire houses can be termed Eastlake, as well. They are similar in over-all effect to both the Eastern Stick and Queen Anne styles, but are generally smaller in scale.

Lathe-shaped wooden forms: Porch posts, railings, balustrades, bargeboards, braces and pendants were characterized by a massive, oversized, and robust Eastlake quality; but over the years they became more curvilinear, more Baroque in style. These members were worked or turned on a mechanical lathe, giving the appearance of heavy legged furniture of the period.