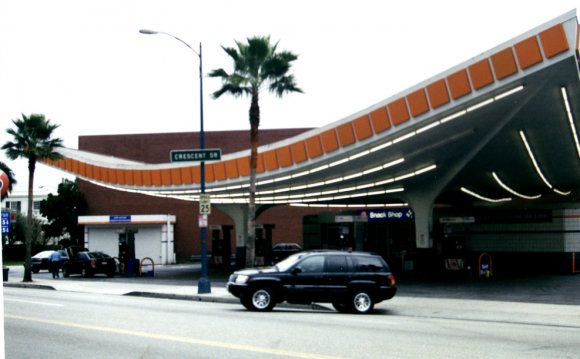 I always find it hard to concisely explain what Googie is. So, like any modern troglodyte I will turn to Wikipedia for all my answers.

Here is a wonderful definition of Googie, as defined by the wonders of Wikipedia:

"Googie, also known as populuxe, is a subdivision of futurist architecture influenced by car culture and the Space Age, originating from southern California in the late 1940s and continuing approximately into the mid-1960s. With upswept roofs and, often, curvaceous, geometric shapes, and bold use of glass, steel and neon, it decorated many a motel, coffee house and bowling alley in the 1950s and 1960s. It epitomizes the spirit a generation demanded, looking excitedly towards a bright, technological and futuristic age. As it became clear that the future would not look like The Jetsons, the style came to be timeless rather than futuristic. As with the art deco style of the 1930s, it has remained undervalued until many of its finest examples had been destroyed."

It is true that this style of architecture and signage has been undervalued and in many places torn down to be replaced by more 'modern' designs. Because We Can, however, finds itself drawn to the Googie whimsical style and optimistic spirit, as well as it's intent to celebrate creative design in everyday places, and keeps it close at hand when coming up with new designs.

Over the years we have been visiting and collecting images of Googie. Below is a taste of a few of those images.