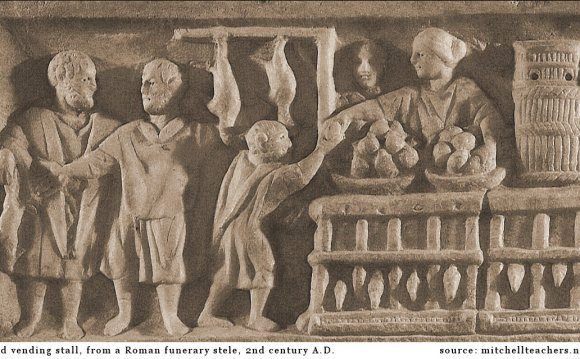 Centered in the city of Rome, the civilization of Ancient Rome ruled much of Europe for over 1000 years. The arts flourished during this time and were often used by the wealthy and powerful to memorialize their deeds and heritage.

The Romans admired the Greek culture and arts. After conquering Greece, they brought many Greek artists to Rome to make sculptures for them in the Greek fashion. The art of Ancient Greece had a great influence on the art of Ancient Rome.

Although Greek art had the greatest influence on the Romans, other civilizations that they conquered and encountered over their wide empire also had influence. These included the Ancient Egyptians, eastern art, the Germans, and the Celtics.

Roman sculpture played an important part of the Roman daily life. Sculptures took the form of full statues, busts (sculptures of just a person's head), reliefs (sculptures that were part of a wall), and sarcophagi (sculptures on tombs). The Ancient Romans decorated with sculptures in a number of places including public buildings, public parks, and private homes and gardens. 
Above is a marble statue of Augustus the first Emperor of Rome. He is shown here wearing a traditional Roman toga while performing his duties as Pontifex Maximus.

One of the most popular types of sculpture in Ancient Rome was the bust. This is a sculpture of just the head. Wealthy Romans would put the busts of their ancestors in the atrium of their homes. This was a way for them to show off their lineage.

The walls of the homes of wealthy Romans were often decorated with paintings. These paintings were frescos painted directly on the walls. Most of these paintings have been destroyed over time, but some of them were preserved in the city of Pompeii when it was buried by the eruption of a volcano.

Painting discovered on a wall in the ruins of Pompeii

The Romans also made pictures from colored tiles call mosaics. The mosaics have been able to survive the test of time better than the paintings. Sometimes the tiles would be applied direct at the site of the mosaic. Other times the tiles and the base would be made in a workshop and the entire mosaic installed later. Mosaics could be art on a wall, but also worked as decorative flooring.

After the Middle Ages, the artists of the Renaissance studied the sculptures, architecture, and art of Ancient Rome and Greece to inspire them. The classic art of the Romans had a significant influence on art for many years.

For more about Ancient Rome: