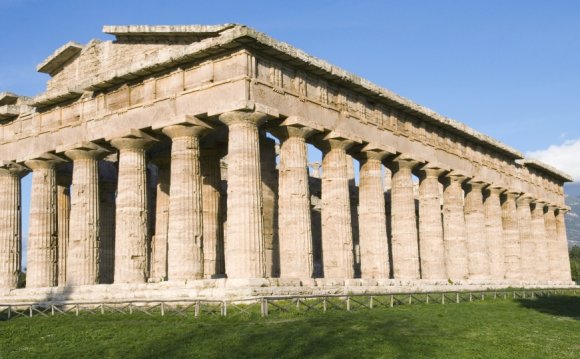 The Greeks certainly had a preference for marble, at least for their public buildings. Initially, though, wood would have been used for not only such basic architectural elements as columns but the entire buildings themselves. Early 8th century BCE temples were so constructed and had thatch roofs. From the late 7th century BCE, temples, in particular, slowly began to be converted into more durable stone edifices; some even had a mix of the two materials. Some scholars have argued that certain decorative features of stone column capitals and elements of the entablature evolved from the skills of the carpenter displayed in more ancient, wooden architectural elements.

The stone of choice was either limestone protected by a layer of marble dust stucco or even better, pure white marble. Also, carved stone was often polished with chamois to provide resistance to water and give a bright finish. The best marble came from Naxos, Paros, and Mt. Pentelicon near Athens.

The ancient Greeks are rightly famous for their magnificent Doric and Ionic temples, and the example par excellence is undoubtedly the Parthenon of Athens. Built in the mid 5th century BCE in order to house the gigantic statue of Athena and to advertise to the world the glory of Athens, it still stands majestically on the city’s acropolis. Other celebrated examples are the massive Temple of Zeus at Olympia (completed c. 460 BCE), the Temple of Artemis at Ephesus (completed c. 430 BCE), which was considered one of the wonders of the ancient world, and the evocative Temple of Poseidon at Sounion (444-440 BCE), perched on the cliffs overlooking the Aegean. The latter is illustrative of the Greek desire that such public buildings should not just fulfil their typical function of housing a statue of a Greek deity, and not only should they be admired from close-up or from the inside, but also that they should be admired from afar. A great deal of effort was made to build temples in prominent positions and, using sophisticated geometry, architects included optical ‘tricks’ such as thickening the lower parts of columns, thickening corner columns, and having columns ever so slightly lean inwards so that from a distance the building seemed perfectly straight and in harmony. Many of these refinements are invisible to the naked eye, and even today only sophisticated measuring devices can detect the minute differences in angles and dimensions. Such refinements indicate that Greek temples were, therefore, not only functional structures but also that the building itself, as a whole, was symbolic and an important element in the civic landscape.