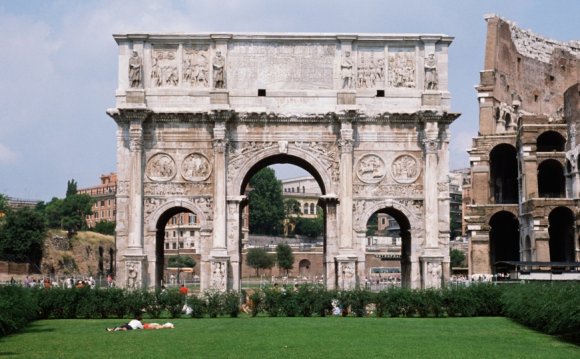 The triumphal arch was a type of Roman architectural monument built all over the empire to commemorate military triumphs and other significant events such as the accession of a new emperor. Arches were often erected over major thoroughfares and as the structure had no practical function as a building it was often richly decorated with architectural details, sculpture and commemorative inscriptions (often using bronze letters). Celebrated surviving examples of triumphal arches include the Arch of Constantine and the Arch of Septimius Severus, both in Rome.

The earliest known examples of triumphal arches date from the 2nd century BCE and were set up by L.Sertinius in the Forum Boarium and near the Circus Maximus in Rome in 196 BCE to commemorate his campaigns in Spain. Sometimes arches were used to replace existing city gates, for example, at Timgad (modern Algeria) in the 2nd century CE, at Antalya (modern Turkey) and at Verulamium in Britain. Arches could also stand across approach roads outside the city proper, for example, at Aosta, Aquino, Canosa and Jerash. At Ancona one triumphal arch even stands in splendid isolation on one of the harbour moles. Many arches were, though, free-standing symbolic monuments protected by steps and so were not accessible to through traffic, for example, the four-way arch of Septimius Severus at Lepcis Magna (c. 200 BCE) and the arches of Tiberius and Titus in Rome.

The largest surviving example of the triumphal arch is the Arch of Constantine, built in Rome in c. 315 CE

Rome alone had over 50 triumphal arches but, unfortunately, most have not survived. Amongst these was the Arch of Augustus which was built in 19 BCE to honour the emperor’s victory over the Parthians. Nevertheless, we do know that the monument had three arches and statues of defeated soldiers. The Arch of Titus (c. 81 CE) does survive and, displaying Titus riding a bronze four-horse chariot (quadriga) and crowned by Victory, it was built to commemorate his victories in Judaea and conquest of Jerusalem in 70-71 CE. Both of these arches stood in the Forum Romanum (Roman Forum). Another surviving arch is the Arch of Septimius Severus built in c. 203 CE, which in fact was also dedicated by the Senate and the People of Rome (S.P.Q.R.) to his son Caracalla in honour of their victories against the Parthians, relief scenes of which, decorate the arch.

The largest surviving example of the triumphal arch is the Arch of Constantine, built in Rome in c. 315 CE to commemorate the emperor Constantine’s victory over Maxentius in 312 CE. The arch is typical of the genre and presents a huge 20 metre high rectangular block of masonry consisting of three separate arches: one larger central arch with a shorter and narrower arch on either side. All three arches express the same ratio of height and width. Dividing the arches are four detached Corinthian columns, each stood on a pedestal and topped with an entablature. Above the entablature, and as it were extending the columns, stand four pedestals, each carrying a statue. The block or ‘attic’ storey above the arches also presents sculpted panels and an inscription in Latin, a common feature of triumphal arches. Parts of the sculpture were recycled from earlier monuments, notably the panels of the attic which were taken from the Arch of Marcus Aurelius (c. 174 CE) and the inner central arch reliefs which were removed from the Basilica Ulpia in Trajan’s Forum. The eight statues are Dacian prisoners and possibly came from the Arch of Domitian. Other panels depict a lion hunt and sacrifices whilst the main frieze scenes commemorate Constantine’s military victories, including the battle with Maxentius.