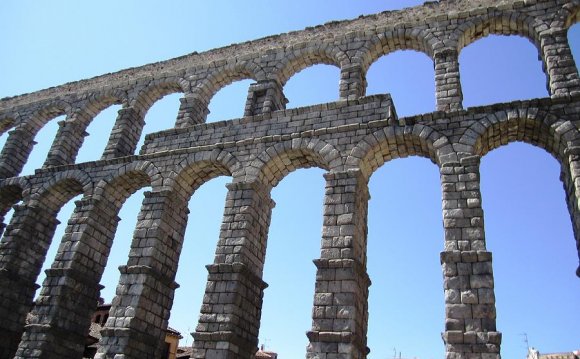 History of the Ancient Roman Aqueducts
The first water supply to Rome was via the River Tiber and local natural springs. However the population of Rome greatly increased and the problem of water supply to all of the people of Rome was resolved through the development of aqueduct technology by the Roman engineers. The date of the first recorded aqueduct in Rome was in the year 312 B.C. A number of additional aqueducts were built conveying water from distant springs and streams to Rome.

How Roman Aqueducts work
People are still fascinated by how Roman aqueducts work. The water in the aqueducts ran gently through concrete channels. Multi-tiered viaducts were developed by Roman engineers to cross low areas. Water from the ancient Roman aqueducts passed into large, covered catch-basins in Rome designed to deposit their sediment. The water from the catch-basins were distributed through free-flowing canals, lead and terra-cotta pipes to storage reservoirs and then through lead pipes, called fistulae, to the people who inhabited the ancient city of Rome. A waste-water collection system discharged the waste into the drains or sewer system. The main outlet of the initial drainage system (Cloaca Maxima) was the Tiber River.

The Romans expended immense sums of money on the Ancient Roman aqueducts and baths. One of the most remarkable aqueducts was the Claudian aqueduct, which was completed by the emperor Claudius although started by Caligula. They featured high arches and beautiful and stately pillars. The first invention of aqueducts, is attributed to Appius Claudius, four hundred forty-one years from the foundation of the city of Rome, who brought water into the city, by a channel of eleven miles in length—but afterwards several others of greater magnitude were built: several of them were cut through the mountains, and all other impediments for about forty miles together, and of such a height that a man on horseback might ride through them without the least difficulty. But this is meant only of the constant course of the channel, for the vaults and arches were in some places one hundred and nine feet high. It is said that Rome was supplied with five hundred thousand barrels every twenty-four hours by means of these Ancient Roman aqueducts. The cloacae or sewers were constructed by undermining and cutting through the seven hills upon which Rome stood. The Cloaca Maxima was the main sewerage system of Ancient Rome.

Ancient Roman Aqueducts - the Aqua Claudia
The Colosseum Amphitheatre was provided with water via the Aqua Claudia aqueduct and distributed through free-flowing canals, lead and terra-cotta pipes to storage reservoirs and then through lead pipes. A waste-water collection system discharged the waste into the drains or sewer system. The main outlet of the initial drainage system (Cloaca Maxima) was the Tiber River.

The Importance of Ancient Roman Aqueducts
The importance of the ancient Roman aqueducts cannot be emphasised enough. The final destruction Rome occurred in 537 AD during a siege on Rome by the Goths. The aqueducts which supplied Rome with water were destroyed. The people of Rome could not survive without water and the population of Rome fell by 90%.