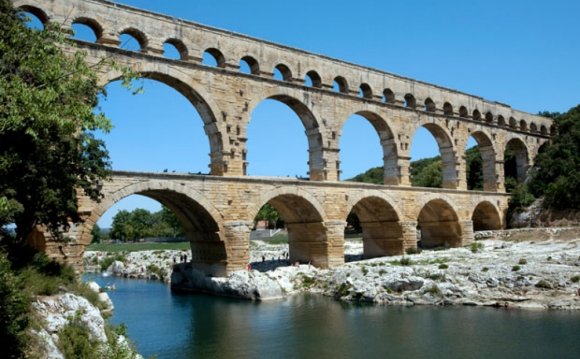 Even today, almost 2000 years after its construction, the breathtaking pantheon is a remarkable building to see. The spectacular design, proportions, elegance and harmony are a striking reminder of the architecture of the great Roman Empire. When Michelangelo saw this wonder for the first time he said that it looks more like the work of angels, not humans.

The word Pantheon is a Greek adjective meaning “honor all Gods”. In fact the pantheon was first built as a temple to all gods.

2 It is the best preserved Ancient Roman monument. It is a bit of a mystery how the Pantheon managed to survive barbarian raids when all the rest of Roman monuments had been shattered. Its turning into a church in 609 AD has a lot to do with it in later time, but also the structure itself is way ahead of its time. In fact, the exact composition of the material is still unknown and appears to be structurally similar to modern day concrete! Whatever the reasons are, the Pantheon is the only structure of its age and size that has successfully survived the damage of time and gravity, still intact with all its splendor and beauty.

3 The exact age of the pantheon remains unknown. The Roman legend tells that the original Pantheon was built on the very site and was dedicated to Romulus, their mythological founder, after he ascended to heaven from that site. Most historians claim that Emperor Augustus right hand, Agrippa, built the first Pantheon in 27 BC. It burned in the great fire of 80 AD, was rebuilt by Emperor Domitian, but was struck by lightning and burned again in 110 AD. The Pantheon as we know it today was built in 120 AD by Emperor Hadrian Who was passionate with architecture and designed it together with Apollodorus of Damascus, a famous Greek architect of the time who unfortunately was executed by order of the Emperor, because of an argument about the design of the temple… 4 The most fascinating part of the Pantheon is its giant dome, with its famous hole in the top (The eye of the Pantheon, or oculus). The dome was the largest in the world for 1300 years and until today it remains the largest unsupported dome in the world! The diameter of the dome is 43.30 meters or 142ft (for comparison, the United States Capitol dome is 96 feet in diameter) and is in perfect proportion with the Pantheon by the fact that the distance from the floor to the top of the dome is exactly equal to its diameter.

The great architectural achievement was due to the massive weight of the large dome. Roman engineers lightened the dome as much as possible; not only its thickness progressively decreases, but the materials used in the upper part of the dome were lighter with internal spaces within the dome walls. The decrease in thickness has the effect that while the interior of the ceiling is spherical, its exterior is slightly “flattened”. It is larger than the dome of St. Peter’s basilica but since it seems flattened from the outside it is hard to get a full sense of its dimension. The hole (oculus), 7.8 meters in diameter, is the only source of light and is the connection between the temple and the gods above. Rain occasionally fall through it, but the floor is slanted and drains the water if it manages to hit the floor. In practice, rain seldom falls inside the dome.

5 The interior has the shape of a cylinder covered by a half of a sphere; the height of the cylinder is equal to the radius of the sphere, and is 43.3 meters (142ft) . There are no windows inside but the large oculus! The Pantheon now contains the tombs of the famous artist Raphael and of several Italian Kings and poets. The marble floor, which features a design consisting of a series of geometric patterns, is still the ancient Roman original. The history of Pantheon was forever changed during the reign of Pope Urban VIII, who melted down every scrap of bronze located upon the ceiling, outraging a great deal of Roman citizens.