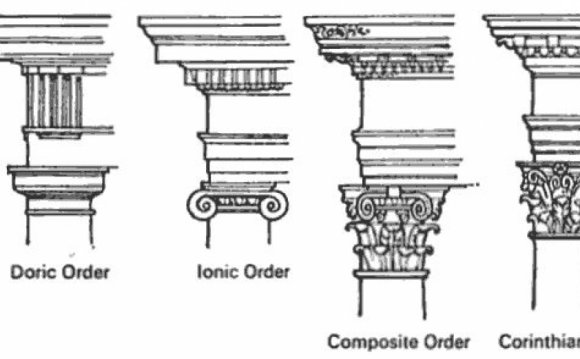 Following the establishment of the Roman Republic in the 5th cent. B.C., Roman architects began to absorb and synthesize influences from both the Etruscans and the Greeks, adapting earlier building types to their specialized urban needs. A characteristic feature of Roman design was the combined use of arcuated and trabeated construction (employing arches and constructed with post and lintel). Although at first tentatively employed in the spaces between the classical columns, the arch eventually came to be the chief structural element. Flanking columns, usually engaged and superimposed (partly embedded into a wall and laid over it), served merely as buttresses or for decoration.

The cut-stone construction of the Greeks was largely replaced after the invention of concrete in the 2d cent. B.C. This enabled architects to cover vast interior spaces with vaults of increasing complexity and without interior supports. These included the barrel vault, the cross or groined vault, and the dome and semidome. Vault buttresses, instead of forming exterior projections, became an integral part of the interior support system. Although unfired brick was employed in all periods, under the empire baked bricks became popular as a facing for concrete walls. From early times stucco was used as a finish for important buildings. For the more luxurious finishing of exterior and interior walls, sheathings of alabaster, porphyry, or marble were used.

Of the Republican period (c.500-27 B.C.), the great aqueducts outside the city of Rome are the most impressive remains, but monumental architectural ruins also have been excavated at the city-state of Gabii. Dated to c.350-250 B.C., the formative period of Roman architecture, the Gabii remains consist of a large complex with stone walls and terraces connected by an impressive staircase and surrounded by rooms as well as other structures. Ambitious and grand in scale, they appear to contradict the small and modest reputation ascribed to buildings of this period; the influence Gabii may have had on the growth of Rome is unclear.

The principal monuments of Roman architecture belong chiefly to the period between 100 B.C. and A.D. 300, including the Colosseum (A.D. 70-82), the Pantheon (A.D. 118-125; see under pantheon), and the Baths of Caracalla (c.A.D. 215). Beginning with the reign of Augustus (30 B.C.-A.D. 14), the Roman architectural output proceeded on a vast scale to accommodate the needs of the rapidly expanding empire. Provincial towns were laid out according to logical plans, particularly in North Africa. In Syria, arcaded streets were built.

Each town's focus was the forum, or open public square, surrounded by colonnades and the principal buildings in axial arrangement. The great forum in Rome itself was built in stages, as each emperor sought to glorify his achievements. The last large forum to be built was that of Trajan (2d cent. A.D.), and was the most extravagant. Within each forum, a temple, conforming to Etruscan type, was usually elevated on a high base with steps ascending to a deep portico. Since the temple was to be seen only from the front, the Roman architect utilized pilasters or engaged columns along its sides. This pseudoperipteral type is seen in the Maison Carrée (1st cent. A.D.) at Nîmes, France. Examples of circular temples include the temple of Vesta at Tivoli (1st cent. B.C.) and the 3d-century temples of Jupiter at Split and Venus at Baalbek.

Most important among the structures developed by the Romans themselves were basilicas, baths, amphitheaters, and triumphal arches. Unlike their Greek prototypes, Roman theaters were freestanding structures. The auditorium was semicircular, with movable seats at the orchestra level. Distinctly Roman innovation were the uniting of stage and auditorium as a single structure and the rich architectural embellishment of the stage itself. For the oval amphitheaters such as the colosseum, there are no known Greek precedents. The monumental or triumphal arch was also a purely Roman invention. The basilica, probably a Roman development based on the Greek temple, provided a large and relatively open interior space. From its original use as a Roman law court, the basilica form was adapted by the Christians for their churches.

The baths, while probably derived from Greek gymnasia, were constructed on a totally unprecedented scale, the complexity of their plan competing with the luxury of their detail. In the typical Roman dwelling, the rooms were grouped about the atrium, which, by means of an opening in its roof, also served as a court. Multistory houses in the larger cities, called insulae, anticipated modern apartment buildings, as can be seen for example at Ostia (3d cent. A.D.). A third type of Roman dwelling was the luxurious country villa built by wealthy citizens to escape the congestion and squalor of the cities.