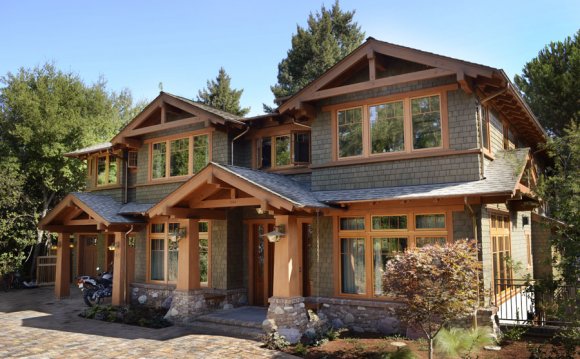 Striving for "honesty of design" is the hallmark of the Craftsman and Craftsman-style home.

Some of the first true Craftsman homes, like the Gamble House by Greene & Greene, were built in California. The open floor plan and earth-hugging horizontal profile was ideally suited for California's mild year-round climate. The design was heavily influenced by the architecture of the Spanish mission buildings and the Japanese aesthetic that was seen everywhere in the first decades of the 20th century.

The magic of the Craftsman-style home was contagious. Homes designed by architectural leaders like the Greene brothers were huge, expensive, and well-appointed with every amenity. At the same time, plans for the rustic or "artistic" home were well within reach of those with more modest pretensions.

Popularizing the style was largely the work of the indefatigable writers like Henry Wilson and Gustav Stickley. Wilson popularized the Craftsman bungalow style on the West Coast through his writings and book, aptly named The Bungalow Book. Stickley, using his magazine The Craftsman to write about all things Arts & Crafts, offered a new house plan in every issue.

To a purist, the essential distinction is that a Craftsman house is unique, typically architect designed and artisan constructed, using the natural materials and flow demanded by the site and environment in which it is built. By contrast, a Craftsman-style house has many of the same design characteristics, but may well be a kit or stick-built by a developer using the same three plans over and over. The difference is in the handcrafted quality of the true Craftsman versus the stylistic elements that may be found in both.