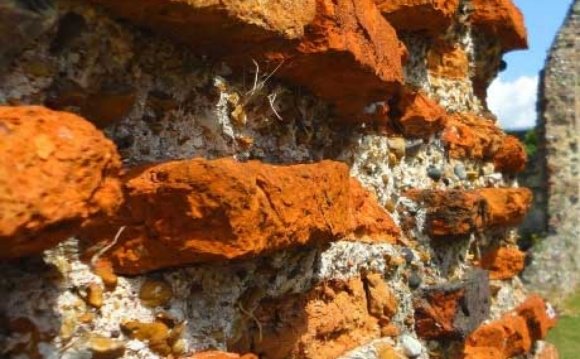 were employed for the building of the Colosseum, all of them easily found or produced in the Roman area: first of all there is the travertino, a limestone, then tuff for the other pillars and radial walls, tiles for the floors of the upper storeys and the walls; finally, concrete (a.k.a. cement) for the vaults.

Travertine, a limestone that the Romans called lapis Tiburtinus, is a sedimentary stone made essentially of calcite, deposited by calcareous waters. Its colour is whitish, slightly yellow or reddish. It is still used for building, for floors or as a veneer. It is common in Tuscany, Umbria, Lazio, Marche. The stone can stand a pressure of 226/298 Kg/cmq, depending on its quality. The travertino of the Colosseum was quarried from Tibur (today Tivoli, a town about 20 Km from Rome); it was used for the main pillars, the ground floor and the external wall. A road was built for the transport of the stone from Tibur.
(tofus in Latin, tufo in Italian, sometimes tufa in English, meaning in general a porous stone consolidated and stratified, though the tendency is to use tufa for calcareous stone deposited by waters and to restrict tuff to volcanic ash) is a stone produced by the cementing of vulcanic material fallen after eruptions. Its colour is gray, yellowish, greenish or brown. It is used in the preparation of special cements and as a building stone (peperino).

Tiles and bricks were produced with clay mixed with water and often with sand, straw and finely ground pozzolana. The mixture was pressed by hand into a wooden mould, and dried first in the sun. The tiles had to be turned over often, so as that they would not bend.
After a long time of drying under cover, the tiles were placed in the oven and baked at 800°C. They were produced in standard sizes (full and hollow bricks, tiles for roofs etc). Bricks could be used in wall structures, as roofing and as filling, often by using the leftovers of former works.

(most of the info from Benjamin Herring "The secrets of Roman Concrete"  Constructor, Sept. 2002  in )
Cement, or concrete, is a building material with a binding agent, usually produced by mixing finely ground limestone and clay. It reacts to water by forming a cement that hardens to the consistency of stone. When mixed with sand, small stones or pebbles takes the name of concrete aggregate (or beton).

(malta) is a mix of a binding agent (calcia, cement) and water (malta semplice) or with water and sand (m. composta). It hardens when exposed to air (malta aerea) and also in water (malta idraulica).

is a binding agent that Romans obtained by heating limestone  which contains calcium, carbon and oxygen - in a kiln. Limestone undergoes a chemical reaction in which the carbon and some of the oxygen will be driven off as carbon dioxide, leaving a highly reactive product known as quicklime, or calcium oxide.
Quicklime in water starts a bubbling, heat-producing chemical reaction which yields a white colloidal paste, called hydrated lime or slaked lime. In chemical terms: CaCO3  calcium carbonate  when heated becomes CaO and liberates CO2 (carbon dioxide). CaO + water H2O becomes Ca(OH)2, that is calcium idroxide (slaked or hydrated lime). Concrete is produced by mixing that paste with river sand or pozzolana.
The quicklime was converted into lime paste by immersing it in water. By adding water to the lime, Romans produced:

How to make an Architecture model of Roman Pantheon (Part 2)

How to make an Architecture model of Roman Pantheon (Part 1)