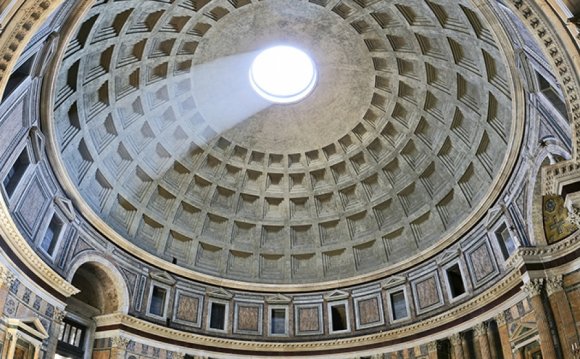 The dome became not only an architectural problem, but also demanded great engineering skill and Filippo invented, and patented, a new hoisting machine for raising the masonry required for the dome.

The dome contains over 4 million bricks and the structure rests on a drum not on the roof itself, this allowed the dome to be built without the need for scaffolding from the ground. The two shells of the dome are supported by ribbed reinforcements and are joined by horizontal and vertical struts through which the staircase weaves it's way to the top of the structure. The base of the dome is tensioned by horizontal chains of iron and wood. (The elders of Florence had forbidden the use of external buttresses, and this was a part of the architect's solution to the problem).

Visit if you can Florence is a magnificent city. If you look at the cupola (below left) it's just possible to see the visitors at the top of the dome this gives some idea of the huge scale of the building.

The cathedral dome still dominates the skyline of Florence today, it remains as a lasting testament to a great architect.

Brunelleschi increasingly turned his attention away from the trade of the goldsmith to concentrate exclusively on architecture.

The Loggia of Ospedale degli innocenti was to be his first major commission.

The "hospital of the innocents" was originally an orphanage overseen by the powerful Silk Guild of Florence. Fillipo based his design on Classical Roman and Gothic architecture and certainly a building such as this had never before been seen in crowded Florence. The Loggia fronts the building it's balance and elegance is captured in it's slim columns with Corinthian capitals supporting arched arcades.

The arcade spandrels are decorated with blue-coloured terracotta medallions created by the sculptor Andrea della Robbia.