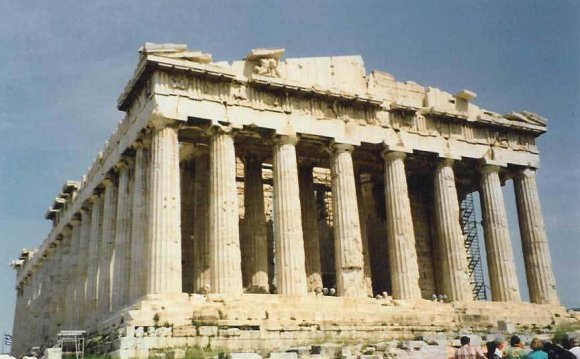 The classics surround us, and their impact in architecture is especially apparent, from the neoclassical designs of the campus of the University of Virginia to the U.S. Capitol to the New York Stock Exchange. The phenomena is prevalent in Chicago, where it manifests in obvious forms like the Museum of Science and Industry—Daniel Burnham's "White City" immortalized—and more subtle ones, such as graphic reliefs on buildings citywide that use Greco-Roman motifs to portray Chicago’s historical role as hog butcher, freight handler, and more to the nation.

Researchers in Northwestern University's classics department, in the Chicago suburb of Evanston, Ill., are exploring the extent of that influence on the city and its surrounding region through Atlas, a new website whose purpose is to collect and share these instances through a series of short articles. A work in progress, Atlas is part of the department's broader Classicizing Chicago project, which aims to make the classics in a range of fields, including art and architecture, more approachable. They're not the only ones bringing the city's history to life. Earlier this year, we covered the grassroots project Chicago Architecture Data, which is cataloging the city’s buildings by architectural style to help visitors spot details such as quoins and dentils on both popular and lesser-traveled city blocks.

Why Chicago? “As scholars, we are interested in why and how actors fashioning a modern American civic identity utilized ancient models, even when they had little familiarity with the ancient sources themselves, ” says Sara Monoson, a political science and classics professor at Northwestern and director of Classicizing Chicago. “Chicago’s relation to the history of American modernism is thus the main reason we chose [it] as our laboratory.” Another factor was the importance of architecture and urban planning to the project. “Chicago stood out, ” she says.

Atlas’ website groups content in the categories of art, commerce, politics, and space. While the city’s rich political and artistic history are rife with classical references—think portrayals of Richard J. Daley as Julius Caesar (left) and Chicagoan and Pulitzer Prize–winner Gwendolyn Brooks’ mock-epic poem “The Anniad”—the category of space is expected to lead “in both quantity and influence in part because of the built environment’s centrality to the story of Chicago and in part because of its lasting visibility, ” Monoson says.