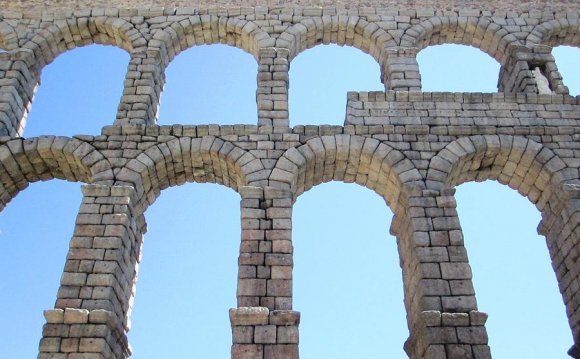 The Arch of Septimius Severus, erected in 203 CE, stands in Rome and commemorates the Roman victories over the Parthians in the final decade of the 2nd century CE. The triple triumphal arch was one of the most richly decorated of its type and even today, although badly damaged, it stands in the Forum Romanum as a lasting and imposing monument to Roman vanity.

The arch stands on the Via Sacra in the Forum Romanum of Rome and has the three arches typical of later Roman triumphal arches. The larger central archway was used for traffic, whilst the two outer arches were closed off by steps. In terms of construction materials the core and foundations are of tavertine whilst, the whole is faced with Proconnesian marble, a feature of which is its grey and white bands. The eight composite columns, four on each façade, are of the same marble type.

It was possible to climb the arch via an inner staircase within the south pier, although the entrance was actually 5 m above ground level for security. There was both a walkway above the second cornice and access to the roof through the hollow attic.

The inscription on the attic, originally with gilded bronze lettering, is a dedication to Septimius Severus and his two sons Caracalla and Geta who ‘restored the Republic and expanded the dominion of the Roman people’. This refers to the successful campaigns against the Parthians in modern Iran when Septimius Severus took the city of Ctesiphon (197 CE) and created the new Roman province of Mesopotamia (199 CE). Interestingly, the inscription was changed following Geta’s murder by his brother Caracalla in 212 CE, perhaps due to a guilty conscience, with the addition of P. Septimo L. fil. Getae nobliss Caesari or ‘most noble Caesar Geta’. The arch was richly decorated with sculpture which depicted scenes from the military campaigns in Parthia, the seasons, various deities, and victories. The style of the sculpture is similar to that on the column of Marcus Aurelius c. 180 CE but, unfortunately, it is in a poor state of preservation and many scenes are barely discernible today. Above the central arch on both façades are winged victories who each carry trophies. The arch has the typical central keystone of this genre of architectural monument which here represents Mars, the Roman god of war. The smaller arches also have keystones which are carved to represent Bacchus and Hercules - gods which Septimius Severus held in particular esteem. The lower arches also carry figures, this time river gods. Above each of the small arches is a frieze which depicts a triumphal procession where booty and prisoners are being shown off. The column plinths each have relief sculpture showing Roman soldiers with captured Parthians. The most impressive sculpture is found on four huge panels - two on each façade - which show scenes from the military campaigns in Parthia. The left panel on the Forum side shows the army leaving their camp, a battle, Septimius Severus speaking before his troops, and the liberation of Nisibis. The right panel shows siege machines attacking the city of Edessa, a group of Parthians surrendering to Septimius Severus, a war council within a fortified camp, and the launch of a new campaign. On the Capitoline side the left panel depicts the city of Seleucia under attack, its eventual fall, and defeated Parthians. The right panel shows the siege of Ctesiphon with its ultimate defeat and Septimius Severus speaking in front of his victorious army.

On top of the structure, as indicated in coins of the period, there would once have been a six-horse chariot in gilded bronze on which rode a statue of Septimius Severus. The emperor was also originally flanked by his two sons on horseback, possibly rendered in silver. Trophies and garlands in bronze would also once have adorned the plain surfaces around the inscription on the façades.

The monument, like many other buildings from antiquity, suffered in later times, particularly in the Middle Ages when it was converted into a fortress, towers were added, and the structure was incorporated into surrounding buildings. Within the central passage a sculptor or stonemason even had a shop and the profiles he carved into the inner walls are still visible today. Likewise, the smaller archways were used for commerce right up until the 19th century CE. The worst damage to the structure, however, stems from the inferior quality of the original material and possibly also workmanship when it was originally built. Several deep cracks in the marble, vertical fissures in the columns, and the breaking off of pieces of sculpture can be attributed to the workmen not paying proper attention to the natural bedding of the marble. The sculptures have also suffered severe damage due to weathering and environmental pollution.

arches and vaults in roman civilisation