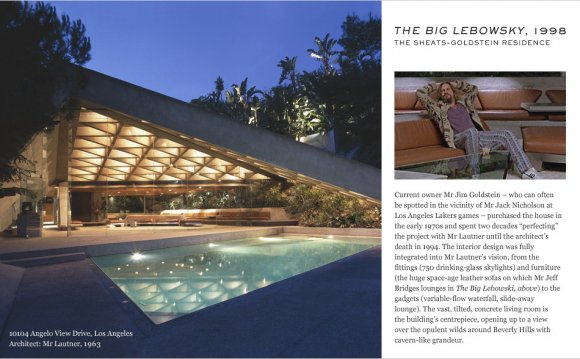 GRAMMY-nominated musician Moby has had a lifelong interest in architecture and photography. After he moved to Los Angeles, Moby was fascinated by the “strangeness and the randomness” of L.A. architecture. Comparing the architecture in Los Angeles with New York and other cities, Moby said that in L.A. the “great architecture is hidden, and it’s weird, and that’s what led me to start my weird architecture blog.”

In the following video interview with 1883 Magazine, Moby talks about some of his favorite Los Angeles buildings and landmarks. Read on for more information about these architectural gems.

Located in Los Feliz, the Ennis House is a residential dwelling designed by Frank Lloyd Wright for Charles and Mabel Ennis in 1923, and built in 1924.

In the 1883 Magazine interview, Moby praises the Ennis House as “probably the most iconic piece of L.A. residential architecture.” He also thinks “it’s the strangest house I’ve ever seen in my entire life, ” comparing it to a “Mayan spaceship from 100, 000 years ago.” It’s an appropriate description: the Ennis House design is based on ancient Mayan temples, and the ornamentation on its textile blocks is inspired by buildings in the Mayan city of Uxmal in Mexico. The Ennis House has made numerous film appearances, perhaps most famously in Blade Runner. The Ennis House is designated as Los Angeles Historic-Cultural Monument #149, California Historical Landmark #1011, and is listed in the National Register of Historic Places.

The Hollywood Adventist Church is a Seventh-day Adventist congregation, easily seen from its location on Hollywood Boulevard and Van Ness, just off the 101 Freeway. Of the uniquely-designed building, with its mixed-bag architectural style and faded purple exterior, Moby said simply, “there’s a weird beauty to it.” According to Wikipedia, the Seventh-day Adventist Church is a “Protestant Christian denomination distinguished by its observance of Saturday, the original seventh day of the Judeo-Christian week, as the Sabbath, and by its emphasis on the imminent second coming (Advent) of Jesus Christ. The denomination grew out of the Millerite movement in the United States during the middle part of the 19th century and was formally established in 1863.”