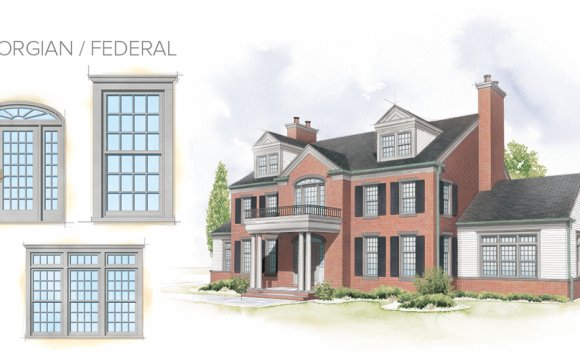 Sometimes called the “Adam” style, the Federal style was the predominant architectural language in the US from 1780 to 1820.

The Federal, or Adam, style dominated the American architectural landscape from roughly 1780 to 1840, having evolved from Georgian architecture, the principal design language of the colonial period. Fundamentally, it was the comparatively progressive European ideas about architecture that prompted this American change in taste to favor Federal architecture and design. Indeed, many historians today think of the Federal style as merely a refinement of the Georgian style, a view easily justified by a close comparison of the two.

In general, the term “Federal” connotes a period in American history when our Federal system of governance was being developed and honed. More specifically, Federal architecture refers to the buildings that went up during the ensuing construction boom in which designers readily incorporated styling variants popular in Europe. Despite the long fight for independence, Americans were highly influenced by Robert Adam (1728–1792), Great Britain’s most popular architect, whose work was heavily indebted to ancient Greek and Roman forms. Nonetheless, to this day, Federal architecture’s association with America’s hard-won independence lends the Federal style a special cachet with preservationists and architectural aficionados. Federal style buildings are found in virtually every eastern city, from New England’s seaport towns, where merchant princes grew rich from trade to Georgetown and Alexandria, Virginia, which were burgeoning in population and importance at about the same time. Easily recognizable Federal style homes can be found throughout the Greater Washington, D.C. area, including Woodlawn Plantation (1805) in Virginia, Tudor Place (1815) and Decatur House (1819) in the capitol city.

Typically, a Federal style house is a simple square or rectangular box, two or three stories high and two rooms deep. Some Federal styled homes have been made larger, modified with projecting wings, attached dependencies or even both. In some Federal homes and buildings, one can find an elaborate curved or polygonal floor plan such as with the Octagon House in Washington, D.C. (1799) located at 18th Street and New York Avenue NW. In the Rockville historic district at 103 West Montgomery Avenue, the Beall-Dawson house is an excellent example of Federal style.

Many Federal style design elements are notably understated. For example, exterior decoration in Federal styles and designs is generally confined to a porch or entry element. Compared to a Georgian house, the columns and moldings in Federal architecture are narrow and rather simple. Federal style architecture often showcases geometrical concepts. Elliptical, circular and fan-shaped motifs formed by fluted radiating lines are common decorations found in Federal style homes and office buildings. One of the oldest American examples of such flourishes is on the dining-room ceiling of Mount Vernon. Executed in plaster, the Federal design contains an ornamental rinceau border festooned by corn husks and a central rosette.

Not surprisingly, the building materials in Federal style architecture vary with location. The homes of the Northeast were typically made of clapboard, while Southern houses were often brick as are most of the Federal style homes in the urban north, where fireproofing was much desired.

Hip roofs capped by a balustrade and simple gable shapes (such as those on numerous Federal town houses in Washington, D.C.) and even roofs with a center gable crowned by a front façade pediment, are among the most popular Federal roof styles. The Friendship House, located on South Carolina Avenue SE on Capitol Hill (c. 1795), is an example of the front façade pediment.

Dormers often pierce the roof to bring light and space into an attic. The Carberry House (1803) at 421½ Sixth Street S.E. in the Capitol Hill area of Washington, D.C. is a particularly good example.

Windows are never grouped in a Federal style house, but are arranged individually in strict horizontal and vertical symmetry. Typically, the front windows in a federal style home are five-ranked, although there are examples of three and seven-ranked windows. Palladian-style windows are often used in gables as an architectural flourish. Windows are almost invariably composed of double-hung wood sashes with the top sash held in place by metal pins (counterbalancing weights had not been invented yet). Thin wooden muntins divide the window into small lights (panes). Before the Revolutionary War, the standard light was 6” x 8”, but as glazing technologies improved, the size increased to 8” x 13”. Generally, the windows feature six over six lights, although nine over nine and other configurations can also be found in several federal style homes.

Befitting its importance, especially when the center of a strictly symmetrical façade, the front door of a Federal home is usually the most decorated part of the home’s exterior. On this score, a semicircular or elliptical fan light above the door with or without flanking sidelights is a favorite device used in Federal architecture.

A doorway’s surround might also include ornate molding or a small entry porch. Some Federal style designers often enhance the drama of the front entrance with curvilinear lines, front stair rails, iron balconies and even curved fronts. Decorative moldings, such as tooth-like dentils, are often used to emphasize cornices in the Federal design.