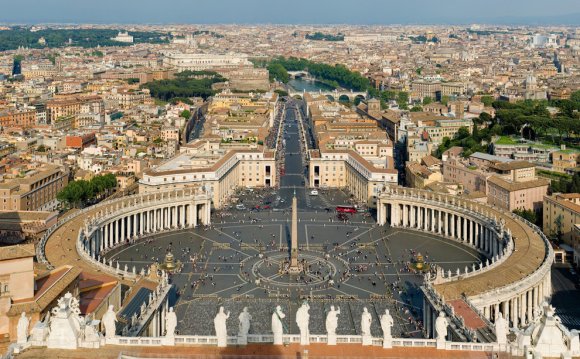 1. Ostia Antica
Let’s be honest, when you were thinking of what to see in Rome, Ostia Antica probably wasn’t the first site you came across. Yet this underrated gem is one of Rome’s best tourist attractions. Ostia contains the amazingly well preserved remains of Rome’s ancient port – it’s quiet, fascinating and just brilliant to explore.
Photo by dalbera (cc) 2. The Colosseum
Now the Colosseum, that crops up on every list of sites to see in Rome there ever was. And with good reason. Once the largest amphitheatre of the Empire, where gladiators, criminals and lions alike fought for their lives, the Colosseum is an absolute must for any tour of Rome, despite crowds and cheap costumes...
Photo by albertopveiga (cc)

3. Villa dei Quintili
Of all the places to visit in Rome, Villa dei Quintili is one of the most forgotten. Yet this ancient villa, once home to Emperor Commodus (the baddie in Gladiator), is captivating. It remains in good nick all-in-all, and you can even see Commodus’ private gladiatorial training arena (not that it did him much good in the film…)
Photo by carolemadge1 (cc)

4. San Clemente
Ever heard of Mithras? If things had gone differently you might be worshipping the guy. A popular Roman deity, there were Mithraeum across the Empire. One example is under the beautiful San Clemente. There’s loads to see in the depths of this church – so when considering what to see in Rome, definitely check this out.
Photo by kevingessner (cc)

5. Palatine Hill
Let’s face it, the Palatine Hill was the Primrose Hill of its day – where all those who wanted to see and be seen had a pad. Today it’s among the most visited of Rome’s tourist attractions and houses some of the city’s most impressive ancient sites. Don’t miss the small museum and the houses of Augustus and Livia.
Photo by rmlowe (cc)

6. Roman Forum
One of the most famous places to visit in Rome, the Forum was the centre of Roman life. Today it lacks its former grandeur and needs a bit of imagination to really get the idea – until the oft-touted Roman theme park is built of course – but it does have loads to see. There are free tours you can join and these are worthwhile.
Photo by Vvillamon (cc)

7. Vatican Museums
You can’t come to Rome without visiting the Vatican Museums which are rightfully placed among the top sights in Rome. From frescoes by Raphael and the sarcophagus of the Junius Bassus to the famed Sistine Chapel, they house a comprehensive collection of artwork and historical pieces from throughout history.
Photo by archer10 (Dennis) (cc)

8. Catacombs of San Callisto
Eerie, creepy yet fascinating at the same time, Rome plays host to a number of tucked-away Christian catacombs. The largest crypt belongs to that of San Callisto, which holds half a million bodies and offers tourist a glimpse of the macabre. When considering what to see in Rome, this is certainly one for your left-field list.
Photo by Northfielder (cc)

9. Via Appia Antica
If all roads lead to Rome then this was the ancient world’s biggest superhighway and is a key entry on any list of what to see in Rome. Not only was it Rome’s most prominent artery, it was also the burial place of choice for many of Rome’s citizens and today you can see a host of tombs and public buildings.
Photo by Oggie Dog (cc)

10. Hadrian’s Villa
The private residence of one of Rome’s most famous Emperors, it turns out he liked building villas as well as walls. Nowadays the remains of Hadrian’s Villa are a bit of a trek and may not often feature among the top places to visit in Rome. But if you put in the effort, you won’t be disappointed.
Photo by RomeCabs (cc)

Castel Sant Angelo
Originally the tomb of the Emperor Hadrian, Castel Sant Angelo looms large over the Tiber making it one of the most striking sites to see in Rome. Today, it is home to a museum as well as the remains of the Emperor's Mausoleum, medieval prison cells and the papal apartments.
Photo by edwin.11 (cc)

Musei Capitolini
Alright, if the sun is shining you might not want to be inside, that’s fair enough. But at the first sign of the merest hint of a drop of rain, head for the Musei Capitolini, one of the top sights in Rome. Located near the Forum, it contains a huge wealth of artefacts and exhibits from the ancient, medieval and renaissance worlds.
Photo by Friar's Balsam (cc)

Pantheon
The Pantheon is one of the best-preserved ancient buildings in the world. Though definitely one for your list of places to visit in Rome, the truth is that it doesn’t really take all that long and you have to remind yourself that you’re looking at a 2, 000 year-old building to really understand the magnificence of what you’re viewing.
Photo by Biker Jun (cc)

Pyramid of Cestius
The Pyramid of Cestius is cool. A mini pyramid just sitting in Italy’s capital, where it really has no right to be. You have to give it to Gaius Cestius, who wasn’t one of Rome’s leading lights by any stretch, yet he will be remembered. Doesn’t take long to see but a great site and among the lesser known places to visit in Rome.
Photo by archer10 (Dennis) (cc)

Santa Maria degli Angeli e dei Martiri
Built by Michelangelo from the surviving structure of the ancient Baths of Diocletian this site has all the ingredients you need for a great place to visit. The sheer scale of this 16th century church gives a good indication of the size of the original baths. One of the more interesting yet underrated tourist attractions in Rome.
Photo by Oggie Dog (cc)

St Peter’s Basilica
There aren’t many people who come to Rome without visiting St Peter’s Basilica – it is one of the first things people tell you if you ask them what to see in Rome. The church itself is magnificent and inside you can view a wealth of historical art as well as the tombs of many Popes.
Photo by jimmyharris (cc)

The Tallest Building in The World