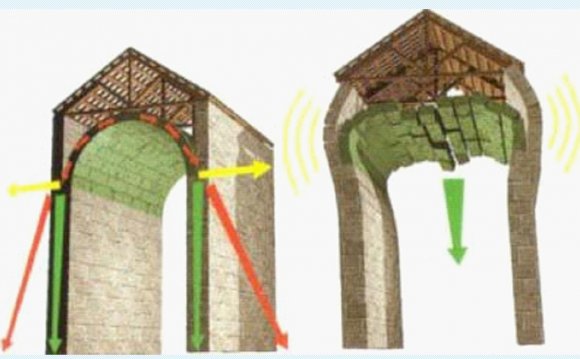 1. Grand, Tall Designs, Which Swept Upwards With Height and Grandeur

The magnificent gothic exterior of York Minster in the UK. Credit: CC-BY-2.0

In the times before gothic architecture, Early Medieval architects struggled to spread the weight of heavy stone walls.

This meant that most towers needed to be short, and buildings thin, otherwise the sheer weight of higher levels (or large rooms and halls) would collapse into themselves.

One of the fundamental characteristics of gothic architecture was its height. New building techniques (such as the flying buttress, detailed below) enabled architects to spread the weight of taller walls and loftier towers.

This all meant that gothic buildings could, quite literally, scale new heights. It allowed them to reach up to the heavens - perfect for cathedrals and churches. The cathedral pictured above is York Minster -

This is the famous Dom - or cathedral - of Cologne. It's an amazing example of the Gothic style.

You'll see that I've scattered photos of the Cologne Dom (Cathedral) throughout this page - see the pic just above. It's one of the most visited tourist attractions in Germany, and miraculously survived the bombings of World War II. It's a phenomenal example of gothic architecture, exhibiting all seven characteristics of this amazing design style. I hope you enjoy the photos!

These flying buttresses are a feature of gothic architecture. They're part of the St Vitus Cathedral in Prague Castle. Credit: CC-BY-SA-2.0 The flying buttress is the defining external characteristic of gothic architecture. These buttresses effectively spread the weight of the new designs, taking the weight off the walls and transferring force directly to the ground.

"The flying buttress was practical and decorative, too"

However, what's particularly notable about the flying buttress is that it's decorative, too.

Rather than just being a simple support, buttresses were often elaborately designed and extremely decorative. They appeared to dart and sweep around each building, giving a sense of movement and of grandeur missing from previous architectural designs.

A modern example of the characteristic pointed arch. Credit: CC-BY-SA-2.0

The innovation of the pointed arch which was the defining internal characteristic of gothic architecture. Its significance was both practical and decorative.

The pointed arch effectively distributed the force of heavier ceilings and bulkier designs, and could support much more weight than previous, simple pillars.

The stronger arches allowed for much more vertical height, too - they literally reached up to the heavens.

The gothic arch wasn't just a workhorse. It had an aesthetic value and beauty which influenced many other features of gothic design - most notably the vaulted ceiling.

The vaulted ceiling was an innovation which lead on from the achievements of the pointed arch.

The delicate vaulted ceilings of Malbork Castle in Poland. These ceilings are another feature of gothic architecture. Credit: CC-BY-2.0

Irregular, vaulted ceilings utilised the technology of the pointed arch to spread force and weight from upper floors. The arch also provided the impression of height and magnificence, giving the vaulted ceiling a feeling of grandeur and elegance.