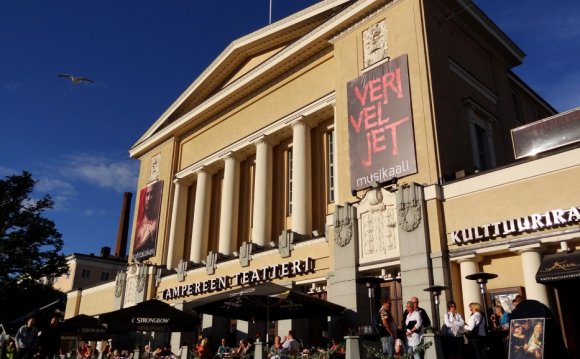 Romantic architecture takes its cue from the movement called Romanticism, which first developed in England during the late 18th century and the Industrial Revolution of the 19th century. It was motivated by a reaction against the rational, classical ideals of the 18th century and introduced a more nuanced understanding of aesthetics, emotions, the deeper sensibilities that motivate people, and of course, the sublime, which draws upon the image of a vast, untamed, and powerful nature for its inspiration. Romanticism spread from Europe to the United States, and is best known in literature, seen in the writings of François-René Chateaubriand and Jean-Jacques Rousseau in France, William Blake and William Wordsworth in England, Johann Wolfgang von Goethe and J. C. Friedrich von Schiller in Germany, and Ralph Waldo Emerson and Edgar Allan Poe in the United States.

In architecture, Romanticism often evokes past styles, such as the Gothic style, seen in the mid-19th-century Gothic Revival. Other types of Romantic architecture are illustrated in a variety of styles considered "exotic" due to their displacement into a "foreign" setting in a more fanciful, less accurate format. Examples of exotic architectural styles include Egyptian-influenced homes, Asian-styled homes, and even Swiss chalets. These homes contain such "exotic" elements as Egyptian columns and small sphinx sculptures, or Japanese-inspired rooflines, or a Swiss chalet A-frame as a decorative overlay to the traditional European building type. Inspired by Napoleon's military campaign to Egypt, which initiated the first modern, sustained research on Ancient Egyptian culture, Egyptian-influenced architecture was very popular in France and England from the 1790s through the first decades of the 19th century.

The Oriental Revival of the early 1800s can be attributed to increased trade with India and China in the later years of the 18th century. The most famous example of this fanciful, Indian-inspired style is seen in the Royal Pavilion in Brighton, England, built by John Nash in 1815-1822 as a seaside home for King George IV when he was the prince regent. The building features a series of onion domes along the roof, with minarets flanking the central dome while the roofline features exotic-styled pointed crenellations capped by balls. The front porch is partially covered with a latticework screen with Moorish horseshoe arches and pseudo-Gothic bifurcated windows.

The interior of the pavilion is done in a Chinese style, with richly decorated rooms suited to a vacation home. Neo-Classicism also enjoyed a continued popularity in the form of the mid-19th-century Greek Revival style, which can be considered a Romantic style. Romanticism is also seen in the introduction of the Italian country villa style during this period, called the Italianate style. However, what makes the Italianate style different from the nearly continuous classical revival that characterizes architecture from antiquity onward is the motivation for its use. In this case, it specifically refers to the more Romantic notion of a nostalgic longing for this Italian Renaissance building type rather than to the more noble philosophical and sometimes political issues that are traditionally pinned to the various classical revivals.

In America, these ideas can be seen in the most ornate Italianate style house in the United States, which is the famous "Breakers House" built overlooking the ocean in Newport, Rhode Island. Designed by Richard Morris Hunt in the 1890s for Cornelius Vanderbilt, this 70-room mansion features a three-part façade where porticoes open at both the ground level and the upper story to allow views of the surrounding countryside. The central porticoes are flanked by wings on either side. While many more modest Italianate homes are made of and feature modified Victorian woodwork, this stone house represents the more monumental form of the Italianate style. Clearly a vacation home for the wealthy, The Breakers takes its cue from the Italian Renaissance villa type to create a visual reference between the Vanderbilt family and the established aristocratic families of Europe, who were widely viewed at this time as more culturally refined than their American counterparts.

The Swiss chalet-style home, also considered a vacation home, became popular in both Europe and the United States after it was introduced in a pattern book published in 1850 by Andrew Jackson Downing. This type of home, originating in the Alps, was more economically amenable to the middle-class than the more "exotic" Indian style, and therefore it found favor during the first several decades of the 20th century, primarily in the mountain regions of the United States.

Finally, the Octagon House, with its eight-sided shape, was introduced during this era as well, and several hundred of them, built on the East Coast and in the Midwest during the 1850s and 1860s, survive today. Introduced in a pattern book published by Orson S. Fowler in 1849, the octagonal house was considered to be very economical, efficient in floor plan, and better lighted than a traditional square building. Fowler's ideas on indoor plumbing and central heating were very forward-looking for his day, and although the Octagon House did not ultimately become widely successful, its economical design and practical features paved the way for subsequent designs created to accommodate the influx of middle-class homeowners in the 20th century.