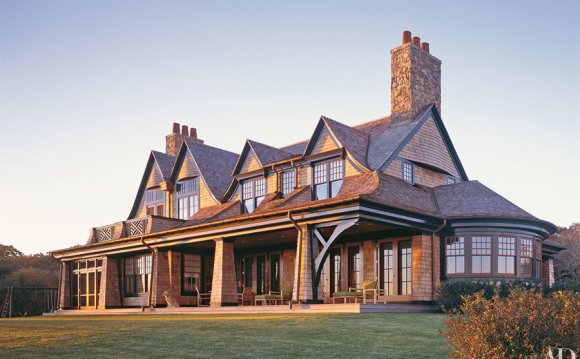 This Victorian style has been called "the architecture of the American summer." By Patricia Poore

A rarefied style in the 19th century, the Victorian-era Shingle Style is one beloved today. Architects cherish its grand informality, Colonial Revivalists appreciate its simple forms and classical allusions, and neo-Victorians exult in its embrace of Islamic and Japanese forms alongside Georgian. It is, as Vincent Scully put it, “the architecture of the American summer.”

Shingle Style has variously been described as “the first modern American house style, “Richardsonian Romanesque done in shingles instead of stone, ” “the first wave of the Colonial Revival, ” and “a subset of the Queen Anne Revival.” As a vernacular style self-consciously rendered by leading architects, it’s hard to pin down. It was born in New England but was popular in the Mid-Atlantic and influential in Chicago and, especially, on the West Coast. It’s informal and highly imaginative—a summer “cottage” style—nevertheless built for wealthy clients.
This rambling, shingle-covered style was the result of an appreciation of New England colonial forms overlaid on the popular Queen Anne movement, with free use of Japanese, Moorish, and Art Nouveau motifs. At Naumkeag, the grandest survivor, mahogany paneled formal rooms downstairs—high-ceilinged, furnished in antiques—have a modern floor plan, and a very un-Victorian lack of ostentation despite their size. Upstairs, bedrooms with netted bed canopies and cozy nooks are quaintly papered.

Some examples are in the old English style of Richard Normal Shaw’s vernacular Queen Anne Revival in England. But many architect-designed and later examples are more obviously Colonial Revival, with classical porch columns and Palladian windows. The colonial motifs and extensive piazzas (porches) make them distinctly American. In most, public rooms are anchored by a huge living hall with a fireplace and an adjacent grand staircase. Original Shingle Style houses are rare: few were built and many of those, being summer homes, have since burned, or been demolished or radically altered. But the style’s influence is apparent in may late-19th-century suburbs, where builders inspired by the well-publicized originals put up their own, more modest versions.

The Shingle Style was highly interpretive and imaginative, exhibiting a range of motifs from old English to Georgian. But certain hallmarks apply:

• Wood shingle skin: Shingles wrap the house, undulating over oriels, corners, and eyebrow windows. You don’t find corner boards and a lot of fussy trim.
• Asymmetry is evident, with cross gables and roof sections of different pitch, wings, turrets, bays and oriels.
• Cottage air: This house type was created for summer homes along the Northeast coast and San Francisco Bay. Regardless of how large or detailed, they have an informality and connection to the outdoors.

Rambling massing, a shingle skin, and an era may be all these houses have in common; medieval, free classic, Norman, and suburban subtypes are evident.

Wood paneling in main rooms is almost universal. In fine examples, it might be raised-panel mahogany to the ceiling. In other houses it’s oak, and in the simpler Shingle-influenced seaside or mountain cottages, battens or beadboard. Built-in window seats and staircase benches, or an inglenook by the fire, contributed to the informal, old cottage feeling.

The Shingle Style and the Stick Style
Still in print, the groundbreaking discourse by Yale architecture professor Scully that named the style in the 1950s. Not a picture book.

Shingle Styles
Very helpful in understanding Shingle architecture and its evolution. Explains the thread that runs from the New England houses of the 1880s through A. Page Brown in San Francisco, Craftsman and Prairie styles, the Rustic, and today’s residential architecture. Stunning photos of 30 important houses of different eras right up to its post-Modern revival.

The Houses of McKim, Mead & White
The pre-eminent firm is known for their Beaux Arts classicism and their public commissions. Seminal, too, were the early houses of MMW and especially those of Stanford White, built for wealthy Easterners during the Gilded Age. From 1879 to 1912, the firm designed over 300 houses in places like Newport, the Hudson Valley, and Long Island. Many were Shingle Style. Here we see exteriors and rooms inside.

Creating the Artful Home: The Aesthetic Movement
In America, the Aesthetic Movement was popular in the same decades as the Shingle Style (1870-1900), and they share traits as transitional styles between Victorian excess and the more naturalistic Arts & Crafts sensibility. This book is more than a history of the movement; it provides insight into the rationale and is helpful for finding a creative approach to home-making now.

The Aesthetic Movement
The English art movement of the 1880s and 1890s that had such great impact even in America. The book is monumental but very readable, starting with the Japonisme fad and moving on to Whistler, Ruskin, Oscar Wilde, Godwin, even Mackintosh. Lavish.

William Morris: Décor and Design
A focused, intelligent resource that doesn’t lose its appeal. Morris’s wallpapers and furnishings are the theme, accompanied by photos of rooms decorated by Morris & Co., and contemporary interpretations, with illustrated pattern glossaries.

William Morris and the Arts & Crafts Home
An introduction to the designs and philosophy of Morris, followed by beautifully photographed case histories of houses today recently decorated in the Morris way (old houses and new, in the U.K and the U.S.).
Related:

The Queen Anne House: America’s Victorian Vernacular
Queen Anne, Shingle, and early Tudor Revival houses in this country all owe a debt to the English Queen Anne movement that brought back vernacular forms. With some houses, it’s hard to tell where Queen Anne ends and Shingle begins. This book showing 21 residences paints a clearer picture of the relationships among styles, and offers plenty of architectural and decorating details.