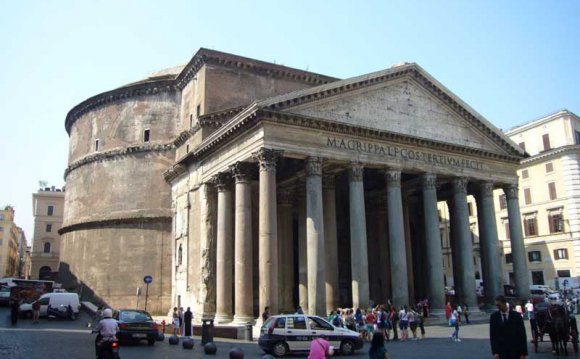 The Pantheon in Rome was not built in a day. Twice destroyed and twice rebuilt, Rome's famous "Temple of All the Gods" began as a rectangular structure. Over the course of a century, this original Pantheon evolved into a domed building, so famous that it has been inspiring architects since before the Middle Ages.

Archaeologists and historians debate which emperor and which architects designed the Pantheon we see today.

In 27 BC, Marcus Agrippa, the first emperor of the Roman Empire, commissioned a rectangular Pantheon building. Agrippa's Pantheon burned down in 80 AD. All that remains is the front portico, with this inscription:

In Latin, fecit means "he made, " so Marcus Agrippa is forever associated with the Parthenon's design and construction. Titus Flavius Domitianus, (or, simply Domitian) became Rome's Emperor and rebuilt Agrippa's work, but it, too burned down in about 110 AD.

Then, in 126 AD, Roman Emperor Hadrian completely rebuilt the Pantheon into the Roman architectural icon we know today. This Roman Pantheon survived many centuries and wars. The Pantheon remains the best-preserved building in Rome.