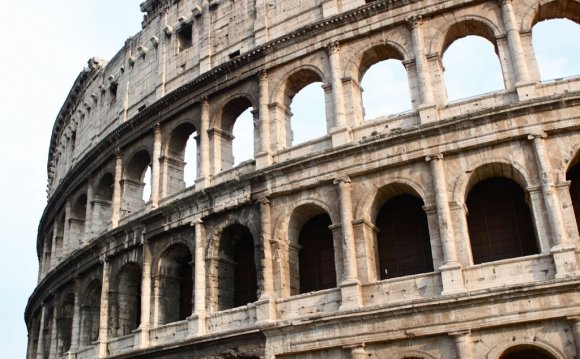 The field engineer, assisted by a stake man aligned the road with a groma and ran levels with chorobates. A plow was used to loosen the soil and mark the trench margins. Workmen dug trenches for a roadbed with a depth of 6 to 9 feet, carrying away the dirt in baskets.

The earthen bed was tamped firm. The foundation of lime mortar or sand was laid to form a level base . Next came stones of about 4 to 5 in. in diameter, cemented together with mortar or clay . This layer could be anywhere from 10 inches to 2 feet deep.

The next course was 9 to 12 inches of concrete filled with shards of pottery or stone. Atop this layer was the nucleus, a concrete made of gravel or sand and lime, poured in layers with each layer compacted with a roller. This layer was one foot at the sides and 18 inc. at the crown of the road. The curvature was to allow good drainage to the finished road.

The top course was the, polygonal blocks of stone that were 6 inches or more thick and carefully fitted atop the still moist concrete. When a road bed became overly worn, this top course was removed, the stones turned over and replaced. A road was 9 to 12 feet wide which allowed 2 chariots to pass in each direction . Sometimes the road was edged with a high stone walkway. Milemarkers indicated the distance. A cart, fitted with a hodometer was used to measure distances. Later maps detailed routes, miles towns, inns, mountains and rivers. The first roads were quite straight going over hills rather than around them.