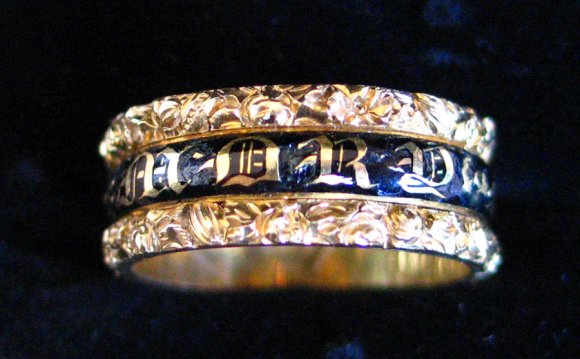 The Gothic Revival period of the early 19th century is an extremely pronounced period of obvious consequences in art and architecture, but also heavily affecting in morality and cultural lifestyle. It is a period that overlapped other forms of mainstream style to eventually become the dominant visual presence, particularly in memorial jewellery and had left its mark for the greater part of the 19th century.

Firstly, we must look at this emerging style to conflict directly with the ideals of the Neoclassical period. Though the Neo-Gothic movement had begun c.1740, it took around sixty years for it to reach mainstream thought, a time when Neoclassicism was at its height.

Much of this thought was a reaction to religious non-conformity in an effort to swing back to the ideals of the High Church and Anglo-Catholic self-belief. This was a time when heavy industry was on the rise and modern society (as we consider it today) was established, a time of radical change that challenged pre-existing ideals of society. Though there had been growing small scale social mobility from the late 17th century, the late 18th and early 19th centuries saw the middle classes having the opportunity to promote through society with the accumulation of wealth. Augustus Welby Northmore Pugin, a designer, architect and convert to Catholicism, saw this industrial revolution as a corruption of the ideal medieval society. Through this, he used Gothic architecture as a way to combat classicism and the industrialisation of society, with Gothic architecture reflecting proper Christian values. Ideologically, Neoclassicism was adopted by liberalism; this reflecting the self, the pursuit of knowledge and the freedom of the monotheistic ecclesiastical system that had controlled Western society throughout the medieval period. Consider that Neoclassicism influenced thought during the same period as the American and French revolutions and it isn’t hard to see the parallels. The Gothic Revival would, in effect, push society into the paradigm of monarchy and conservatism, which would dominate heavily throughout the 19th century and establish many of the values that are still imbued within society today.

As we jewellery historians know, the best way to enact social change is through art and the stylistic affectations that surround us and influence our daily lives visually.

Gothic Revival: Design in a Nutshell (1/6)