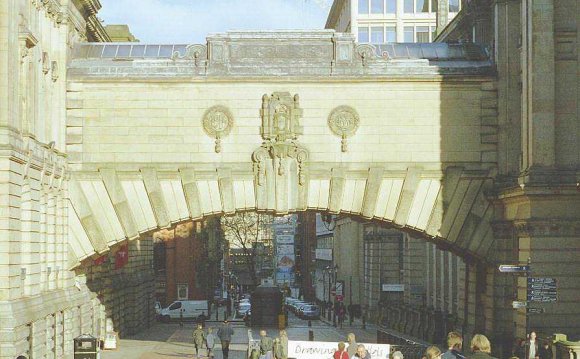 In Gloucestershire, in the "wool" churches, you can see a later style that is much lighter and more open than the Romanesque, built in the lovely pale yellow limestone of the region. Some of these are found in Cirencester, Fairford, Lechlade and Northleach. The medieval builders became quite daring, and by the use of flying buttresses they could make very tall buildings with huge openings in the walls, in which they placed the coloured windows that passed on the message. In an age when there was no cinema, no television, no advertising boards, and so on, these windows must have created an effect which we cannot imagine, engulfed as we are in a world of information in colour.

Some builders became so daring that parts of the buildings fell down. The roof of Beauvais cathedral, begun in 1225, collapsed in 1284. It took about forty years to repair the damage. By 1569 the cathedral was much bigger, with a spire that soared almost 500 feet/152 m into the air. Not for long. In 1573 there was another collapse. Beauvais cathedral was never completed. This is one potential cost of innovation. Even in the 20th century, accidents like those to the Comet 1s, and some box-girder bridges, showed that extrapolation of known procedures can be a dangerous operation, if not informed by complete theoretical understanding.

If you go into Salisbury cathedral, and if you stand very close to each of the four stone columns that support the tower and the spire, you will see the deflections caused by the enormous loads that the original builders never intended. Salisbury without the spire is now unthinkable, but that is how it was originally designed. From miles around, on a clear day, you know that you are approaching Salisbury. The same thing happens with many another town and city which has a great cathedral, especially if it is on a hill, as at Lincoln.

In Salisbury cathedral too, you can see the beautiful chapter house, with a single narrow column at the centre, supporting an octagonal array of arched vaults. Paddling A Gondola By A Building With Arches In Venice ...