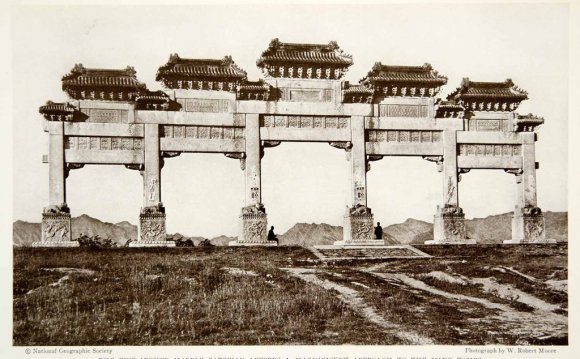 The first humans to inhabit Arches National Park were hunter-gatherers that came to the area to make tools like knives, darts, scrapers and spearpoints from the microcrystalline quartz commonly found in the region. Eventually these paleolithic forebears would come to practice agriculture, cultivating crops like beans, squash and corn in the arid soil. These agrarian societies would develop into the Ancestral Puebloan and Fremont cultures, which were prevalent throughout the southwest until about 700 years ago.

Located on the northern fringes of the Ancestral Puebloan lands, Arches National Park does not have any ancient dwellings, but it does retain other important records of human activity, such as inscriptions in rock. Later peoples such as the Ute and Paiute, which moved into the area as the Puebloan and Fremont were in decline, also left petroglyphs, which can be seen along the Wolfe Ranch Trail. Later petroglyphs can be identified by the presence of figures on horseback, a commodity that the native peoples of the region only gained access to through trade with the Spanish.

The Spanish were the first Europeans to explore the area, as they sought an overland route to connect their settlements in Mexico their missions in California. Yet, the first reliable European claim to visiting the park belongs to a French-American fur trapper named Denis Julien. We know this thanks to his habit of chiseling his name and the date into rocks around the southwest. Julien visited what would become Arches National Park on June 9, 1844.

Most of these explorers were just passing through, and with good reason. The desert wasn’t the easiest place to eke out a living, as early American ranchers and homesteaders would discover. In addition to the harsh climate and generally poor soil, the American Indians in the region weren’t always very accommodating of settlers. Conflict with the Ute routed the first attempt at permanent American settlement in the region in 1855, the Mormon mission at Elk Mountain in present-day Moab. Moab would be founded in the Riverine Valley south of the park in 1878.

Citizens of Moab, particularly the community’s first doctor and a young newspaper editor, were instrumental in spreading word about the magnificent sandstone arches and rock formations north of their frontier town. However, it took the persuasion of a Hungarian-born prospector to rope in the interest of those in power. Inspired by the the dramatic spires of Klondike Bluffs, Alexander Ringhoffer wrote to the Denver and Rio Grande Western Railroad, touting the region’s potential as a tourist destination. Representatives from the railroad would tour the region with Ringhoffer, and later advocate for the establishment of a national park.

President Herbert Hoover granted the region protection as Arches National Monument in 1929, and the park underwent a series of expansions are reorganizations during the mid-20th century. Interestingly, the park’s most famous arch — the picturesque Delicate Arch, symbol of Utah — was not even included in the initial land grant under Hoover. It would take a 1938 expansion of the park by President Franklin Delano Roosevelt to include it and other famous rock formations. Arches National Monument became Arches National Park in 1971.