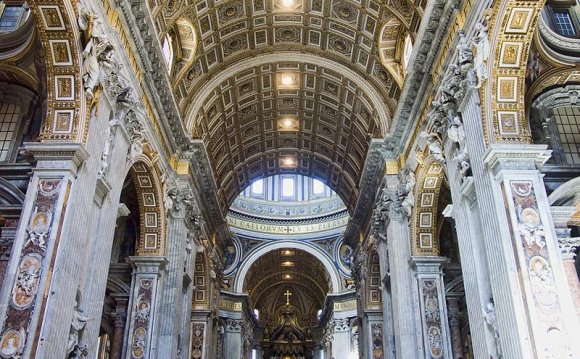 Church buildings are often some of the most beautiful examples of the various kinds of architecture. Three of the more common types of church styles are Baroque, Romantic and Gothic. Despite the variety in design styles, it can be difficult to tell architectural styles apart from one another. This is understandable given the crossover between styles as well the inclination of many architects to create buildings in homage to styles that were common in the past.

Originating in the late 16th century, Baroque architecture was common in Italy and spread to Germany and colonial South America, where it was used until the 18th century. Baroque had its origins in the Counter-Reformation. This was an attempt by the Catholic Church to keep its followers from converting to Protestantism. By building churches with sensory appeal, the Church hoped to draw on parishioners' emotions. The architecture was often based on the use of ovals and circles, which were thought to heighten emotion and sensuality. Notable examples include St. Peter's Basilica in Rome and Stift Melk in Austria. Baroque churches were thought to be grander and more dramatic than other churches since they let in more light and included gilded statues. In addition, the ceilings of the churches were often painted in elaborate mosaics and murals. As Baroque style evolved, it became known as Rococo, which is characterized by a subdued use of color but includes many of the intricate ovals and wide windows to let in light.

The terms ''Romantic'' and ''Neoclassical'' are often used interchangeably to refer to the dominant architecture style from around 1750 to 1900 . As the elaborate designs found in Baroque and Rococo design went out of fashion or became too expensive to reproduce, an appreciation for classical design resurfaced. The simplicity and restraint of classical design began to be valued once more and architects were called "romantic" for seeking to replicate styles popular in ancient Roman and Greek buildings such as the Acropolis and Pompeii. Romantic churches built during the 18th and 19th centuries feature strong walls, sharp lines and separate "identities" for each part of a building. Well known examples include the Cathedral of Vilnius in Lithuania and, while not a church, the United States Capitol Building.

Predating both the Baroque and Romantic styles is Gothic architecture. This is a style familiar to many people from films such as "The Hunchback of Notre Dame" that depict architecture from the mid to late Middle Ages. In addition, the Gothic style is the form of design of many of the greatest churches and cathedrals in Europe. Many castles, universities and palaces are also in Gothic style. The term is normally used to refer to buildings which have pointed arches, ribbed roofs, large windows and ornate facades.

Throughout history, architects often seek to imitate styles predominant during certain periods of the past. Just as Neoclassical architecture hearkened back to the simplicity of Greek and Roman design, Gothic Revival and Neo-Baroque have been common since their heyday and, to some extent, these styles of architecture style influence modern building practices. Given the relevant newness of many of the United States' buildings, churches are often erected in revival styles. The church's architects may wish it to look Gothic or Baroque, for example, even if the church was built long after the high-point of that style.