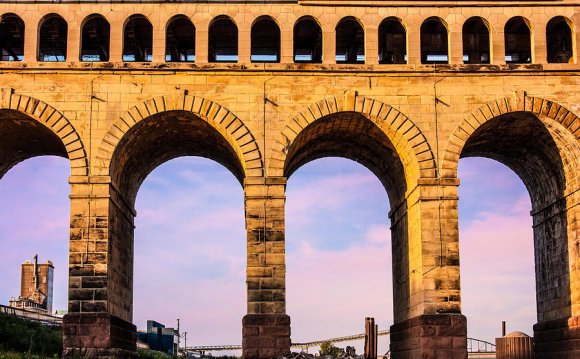 As Roman towns got bigger, in the course of the Roman Republic, it got too hard for the people who lived in the towns to get drinking and washing water. Because raw sewage was draining into the rivers, people who drank river water often got very sick or died. Local governments, first in the city of Rome and then elsewhere in the growing Empire, decided to build long stone channels to carry clean water from nearby hills to the towns. This is an aqueduct of the city of Rome:

These were called aqueducts (ACK-wa-ducts), from the Latin word for water (aqua) and the Latin word for channel (ductus). By the time of the Empire, most Roman towns had at least one aqueduct to bring in fresh water, and big cities like Rome had ten or more.

These aqueducts were quite a challenge to build. The engineering had to be just right in order to get the water to run through the channels and get to the city without stagnating in the channel or coming too fast into the city. They had to keep the slope the same all the time, so sometimes the aqueducts had to run on high arches, and other times along the ground in stone channels, or even under the ground in tunnels.