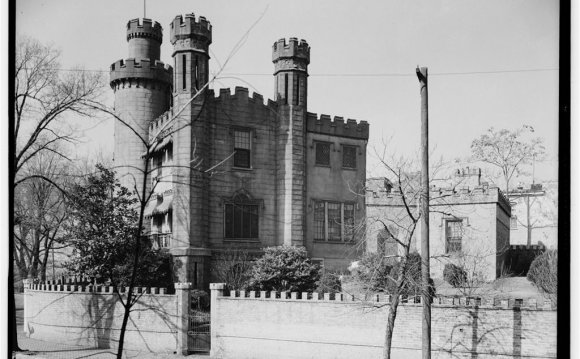 There’s a romantic decadence to Gothic Revival architecture that answers a deep Victorian longing but also can leave a Brothers Grimm aftertaste. It’s like a gingerbread house that’s just lovely — until it helps ensnare Hansel and Gretel.

Like that fairy tale, the original Gothic architecture dates to medieval times.

“It’s very much a religious architecture, ” said Richard Guy Wilson, a chair in architectural history at the University of Virginia. Because of its ties to Catholicism, the style’s pointed arches and flying buttresses fell spectacularly out of favor during the Renaissance, only to reemerge decades later as Gothic Revival.

The first signs of a Gothic Revival appeared during the 1700s with “follies, ” essentially beautiful but useless buildings set in English gardens.

Famous examples include King Alfred’s Tower at Stourhead Estate in Wiltshire and a gothic temple in Buckingham’s Stowe Gardens.

When follies made their way into pattern books, the style traveled to the United States, where it was translated into Gothic Revival churches and homes.

Politically, the style represented “a revulsion against industrialism, going back to the genuine, the Middle Ages when people worked by hand — and everybody lived in the country and everybody was happy, ” Wilson joked.

Gothic Revival also emerged in the United States because it was considered genuinely English, unlike later, classical architectural styles that came out of Italy. Although the United States was politically independent, Wilson said, “culturally and artistically, we were the sons and daughters of England and, increasingly, France. There ain’t much here that we haven’t imported from abroad.”

In the United States, Alexander Jackson Davis championed the style in books and in famous estates such as Lyndhurst in Tarrytown, NY. That home is made of stone, but most Gothic Revival homes in the United States are built of wood.

Typically, a Gothic Revival roof is steeply pitched with decorative gables that often come to a point. A one-story porch over the door or across the entire front of the home is often supported by flattened Gothic arches.

The style was seldom used for urban houses, because pattern books stressed how suitable the Gothic Revival look was for rural settings and because its emphasis on tall gables and wide porches did not lend itself to narrow urban lots, McAlester writes.

There were exceptions, particularly with mixed-use and multi-family structures. Many are on college campuses. For example, this 1886 Gothic Revival building in Pennsylvania started as classrooms for Yale University’s field-based forestry school. It now has two apartments, eight retail shops, a large auditorium and lecture hall.

Around the time of the Civil War, the Gothic Revival design faded but was soon replaced by similar styles such as Tudor and Chateauesque, the latter of which Wilson describes as “a French version” of Gothic Revival. It’s reserved mostly for country estates such as Richard Morris Hunt’s Biltmore Estate in the mountains of North Carolina.

Like many architectural styles, Gothic Revival has its modern-day copycats.

The Gothic Revival and American Church Architecture: An ...