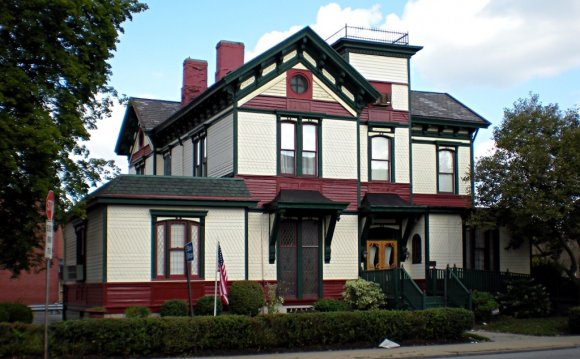 Stick Style is less an architectural style than a type of decorative treatment applied to the outside walls of homes and other buildings in imitation of a medieval construction technique. The term "stick" is a kind of shorthand for half-timbered, and specifically refers to wooden homes in the U.S. built in the first three decades of the 20th century. In the original, half-timbered buildings were literally, half timber and half something else, usually plaster or stone. There are not many extant examples of Stick Style homes because many have been demolished or remodeled. But you can recognize a Stick Style building by the application of wood in patterns that suggest or mimic where timbers might expect to have been if they were actual frames or supports. The main difference between Stick Style and Tudor Revival is that Stick Style almost always refers to a plain, square or rectangular structure constructed of wood, whereas Tudor Revival, applies to half-timber over stucco or brick, and Tudor Revival buildings are usually cross gabled. Stick Style is considered to be a type of Victorian.