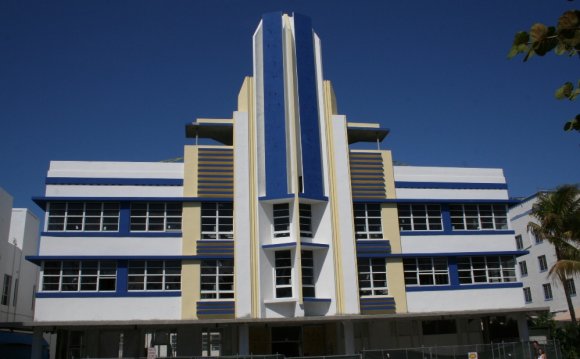 The Art Deco style is one of the easiest to identify since its sharp-edged looks and stylized geometrical decorative details are so distinctive. The development of this architectural style was an intentional break with past precedents in an effort to embody the ideas of the modern age. It was the first American architectural style to look forward rather than back, as the case with the preceding revival styles. Some architectural historians refer to the Art Deco style as "Modernistic" leading to some confusion between Art Deco style buildings and Art Moderne style buildings, both of which can be described as Modernistic. Since the Art Deco and Art Moderne styles are distinctively different in appearance, each style is described separately in this field guide. Both styles were part of the Modern Movement in architecture in the early 20th century, a conscious break with past revival precedents in architecture. The Art Deco style first gained public attention in 1922 in a design competition for the Chicago Tribune Headquarters. Finnish architect Eliel Saarinen submitted an Art Deco design that was not chosen, but was widely publicized and embraced as an exciting new architectural style. In 1925 the Exposition des Arts Decoratifs in Paris further promoted the popularity of Art Deco style architecture, as well as Art Deco inspired jewelry, clothing, furniture and handicrafts.

Art Deco buildings have a sleek, linear appearance with stylized, often geometric ornamentation. The primary façade of Art Deco buildings often feature a series of set backs that create a stepped outline. Low-relief decorative panels can be found at entrances, around windows, along roof edges or as string courses. Art Deco buildings feature distinctive smooth finish building materials such as stucco, concrete block, glazed brick or mosaic tile. Decorative details can incorporate various artistic or exotic motifs to suit the building's function or the architect's whim. Chevrons, zigzags, and other geometrical motifs are common forms of ornament on Art Deco style buildings. Since the Art Deco style was seen as a rejection of historic precedents in its use of new construction technology, it was particularly suitable for the design of the 20th century's newly emerging building form, the skyscraper.

In Pennsylvania Art Deco style buildings may be found in a variety of forms from tall urban skyscrapers to smaller scale buildings, such as post offices, theaters, schools, armories, and apartment buildings. Movie theaters of the 1920s and 30s often incorporated Art Deco design throughout the buildings from the curving lines of the exterior to the stylized décor of the interior curtains, murals and light fixtures. Some WPA (Works Progress Administration) designed buildings of this era are of the Art Deco style as well. The Warner Theater in Erie has a dramatic Art Deco style marquee and interior details. The Prospect Middle School in Pittsburgh is one of several Art Deco inspired school buildings in Pittsburgh designed by the architectural firm of Steen & Sons. The Hamburg Armory in Hamburg Borough, Berks County has a strongly geometrical Art Deco front façade. Numerous examples of Art Deco style upscale apartment buildings can be found in urban settings. Other commonly found Art Deco buildings are post offices and government offices, which often feature stylized eagles or other national symbols. The State Liquor Control Board Building in Harrisburg is one such example with oversize eagles flanking the main entrance.