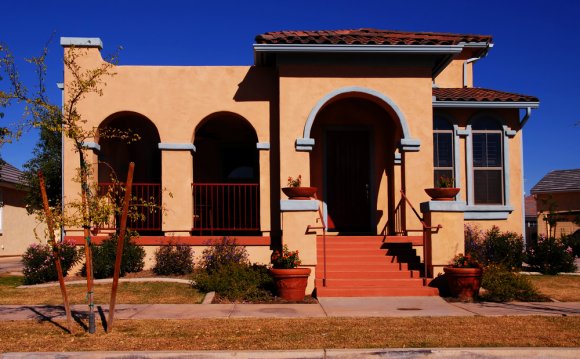 "This style dates back to the tail end of the Spanish Conquistadores, " explains Stacholy. "It is what they knew how to build, and the style fit the environment."

As the style migrated throughout the then-Spanish territories, these homes began to veer away from the Spanish and Mexican originals. Today the term Spanish Colonial Revival is used to describe homes built in the early 20th century that incorporate various elements of Mediterranean architecture. But as with all true styles, these homes are linked by a set of common physical characteristics.

In hot, arid climates, stucco-clad adobe walls are remarkably long-lasting. However, when located in colder, wetter climates, adobe bricks can shrink and swell, causing the protective stucco to crack or pull away from the interior wall. These homes might require minor patches or complete resurfacing to prevent serious moisture problems. Cracked stucco can also be indicative of foundation issues.

Many Spanish Colonials were built with flat roofs, which, when not drained properly, can leak. Clay-tile roof shingles are durable lifetime materials that require only periodic maintenance. Check regularly for cracked, missing or out-of-place tiles.

Wooden timbers, both interior and exterior, should be inspected for moisture and insect damage.

"To me, Spanish Colonial homes are the type where you can’t help but feel comfortable - the kind where you kick off your shoes at the door and pad around in bare feet, " notes Stacholy. With plenty of alfresco gathering spaces, these rambling homes express a sense of relaxation and foster a connection to nature and the surrounding environment.

The style is prevalent in the toasty climates of Florida, California and the Southwest, but Stacholy recommends the Spanish Colonial homes in the sunshine state.

"St. Augustine, Fla., is probably the best living laboratory for Spanish Colonial homes you could ever hope to find, " says Stacholy, pointing specifically to that city’s Colonial Spanish Quarter. When it comes to Spanish Colonial Revival style, the stately Casa del Herrero in Montecito remains essentially unchanged from when it was completed in 1925.