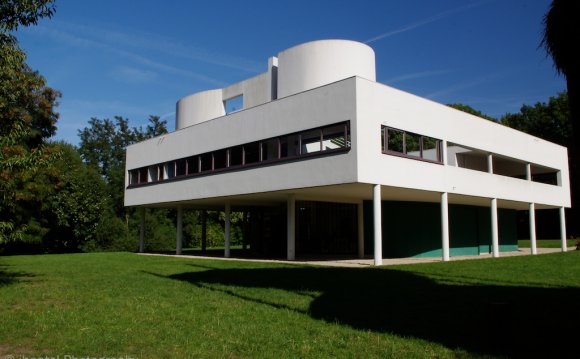 Henry-Russell Hitchcock (1903–1987) was a leading American architectural historian of his generation. A long-time professor at Smith College and New York University, he is best known for writings that helped to define Modern architecture.

Henry-Russell Hitchcock was born in Boston and educated at Middlesex School and Harvard University, receiving his A.B. in 1924 and his M.A. in 1927.

In the early 1930s, at the request of Alfred Barr, Hitchcock collaborated with Philip Johnson (and Lewis Mumford) on "Modern Architecture: International Exhibition" at the Museum of Modern Art (1932), the exhibition that presented the new "International Style" architecture of Europe to an American audience. Hitchcock and Johnson's co-authored book The International Style: Architecture Since 1922 was published simultaneously with the MoMA exhibit.

Four years later Hitchcock's book, The Architecture of H. H. Richardson and His Times (1936) brought the career of American architect Henry Hobson Richardson out of obscurity while also arguing that the distant roots of European Modernism were actually to be found in the United States. Hitchcock's In the Nature of Materials (1942) continued to emphasize the American roots of Modern architecture, in this case by focusing on the career of Frank Lloyd Wright.

Over the course of Hitchock's career, he produced more than a dozen books on architecture. His Architecture: Nineteenth and Twentieth Centuries (1958) is an exhaustive study of more than 150 years of architecture that was widely used as a textbook in architectural history courses from the 1960s to the 1980s, and is still a useful reference today.

He was also a founding member of The Victorian Society in Great Britain and an early president of the Victorian Society in America. One of that Society's book awards is the "Henry-Russell Hitchcock Award." An "Alice Davis Hitchcock Award" is awarded by both the Society of Architectural Historians and the Society of Architectural Historians of Great Britain (SAHGB) and named after Hitchcock's mother.

Hitchcock was gay, one of several gay men in the arts and humanities to emerge from Harvard. Hitchcock died of cancer at age 83.

Hitchcock focused primarily on the formal aspects of design and he regarded the individual architect as the chief determinant in architectural history. Hitchcock's work tended to diminish the role of broader social forces. He has sometimes been criticised for this "great man" or "genealogical" approach.