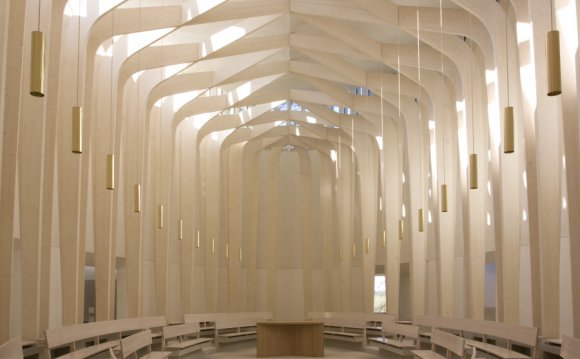 In the beginning: The church of the first four centuries met in privately owned houses (Romans 16:5, 1 Corinthians 16:19, Colossians 4:15, Philemon 2).

There was an explosive growth among the churches in the United States in the early 19th century. Most of the growth was on the frontier, where things had to be improvised, conditions were rustic, and worship was, of necessity, very simple. That, compounded by a simplistic view of the past, causes many people to think that Christian worship in the early centuries was plain, spartan, and simple and that early Christians were uneducated. Nothing could be further from the truth! The apostles did not evangelize the western frontier of the United States; rather, they began by evangelizing major metropolitan areas in the Roman Empire, such as Ephesus and Corinth, and set them up to evangelize the small towns nearby. The members of the congregations were sophisticated, educated Jews and God-fearing gentiles who were very well acquainted with the liturgy of the synagogue. We also tend to think that worship began simple and rustic and later became elaborate, when in reality, it started very elaborate and was simplified with time.

In his book, , Dom Gregory Dix recounts a raid on a house church in Cirta (now in Algeria) on 19 May 303. The official records, which still exist, show that the government confiscated, among other things:

As you can see, early Christian churches were quite different from what many people imagine.

The Roman house was a large building that served both as the residence of the extended household and as their place of business. The front door was the public entrance for people who had business dealings with the household. It opened into a very large rectangular room—the atrium—that had a well, stream, or small pool just inside the entrance. The atrium could be very ornate, with a colorful mosaic floor and paintings of ancestors on the walls, but there was very little, if any furniture. On the other side of the atrium, opposite the front door, there was a raised platform that served as the household’s dining room with a chopping block front and center. There was no wall separating the dining room from the atrium, which allowed servants to attend to the diners from the atrium.

When the household was conducting its business, the atrium was a busy place, filled with people talking to each other and doing business with the household. Since the dining room was a raised platform without a wall separating it from the atrium, it was the best place for the father and his sons to conduct business. The father sat in the center behind the chopping block where he oversaw the proceedings, while his sons, seated on either side against the back wall, conducted the business of the household.

Hebrews 3:5-6 alludes to the different roles of servants and sons in the business dealings of the household:

Moses was faithful as a servant in all God’s house, testifying to what would be said in the future. But Christ is faithful as a son over God’s house. And we are his house, if we hold on to our courage and the hope of which we boast

The sons, by virtue of being sons, had their father’s power of attorney, so whatever they did was binding on the father. Legally, so far as business deals were concerned, the sons were equal to the father:

For this reason the Jews tried all the harder to kill him; not only was he breaking the Sabbath, but he was even calling God his own Father, making himself equal with God.

When a house was converted to a church, the water source at the entrance became the, the atrium became the, the dining room became the, the chopping block became the, the bishop sat in the father’s seat, and the priests sat on either side. The house could accommodate a congregation of about 100-150 people. Pews were invented in the west in the middle ages. Orthodox churches still do not have seats in the nave.

If you would like to see a simplified version of a Roman house church, just look around you in your own church during Sunday worship (if it has the )!

Altar The altar is the table in the chancel that the clergy use for Communion. During the Protestant Reformation, some people felt that the traditional term was theologically misleading. As a result, many people preferred to call it a Communion Table. Anglicans decided that both terms were correct, because it is the altar from which we receive the sacrifice of Jesus Christ, and because it is the table on which we celebrate Communion. Today, Anglicans and Lutherans generally call it the altar, while churches in the Reform tradition tend to call it a Communion table. Apse If the wall behind the altar (the ) is curved, it forms a semicircular area that is called an apse. In ancient times, large church buildings were modeled after a type of Roman public building that had such a wall. Ambo If there is one speaker’s stand in the center of the front of the church, as is typical in churches with a, it serves the functions of both and . The word ambo comes from a Greek word meaning ‘both.’ In common usage, however, ambos are incorrectly called pulpits. Ambry (or Aumbry) An ambry (or aumbry) is a niche in the wall in a large church. It is generally used for storing various articles that are used in worship. Baptistery In a Roman house, the household’s water source was in the atrium just inside the front door. When early Christians converted a house to a church, that water source became the place where baptisms could take place if it wasn’t possible to baptize outdoors. Even though the position of the baptistery was determined by the existing architecture of the house, it took on a symbolic meaning, because baptism is the entrance to the Christian life. Today the position of the baptistery varies. It can be in one of three places: just inside the doors, in the nave in front of the congregation, or behind the chancel.

In churches that usually administer baptism by pouring, the baptistery consists of a stand with a water basin on top. It could be a permanent structure in the front of the congregation or just inside the church doors, or it could be a portable structure that only appears when there is a baptism.

In Protestant churches that administer baptism by immersion, the baptistery is a large tank that is located in the front of the church, either behind the chancel or to one side.