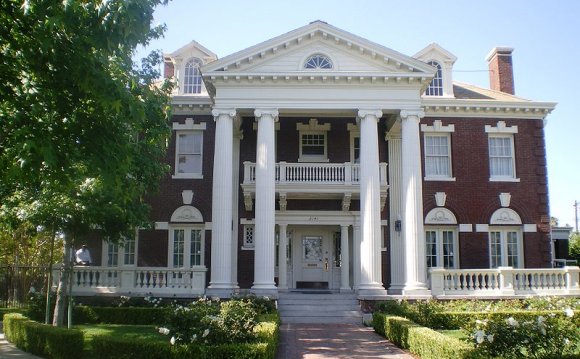 Beginning in the 1880s, fashionable architects were commissioned to design Colonial style houses. The typical 18th-century Georgian house is a one or two-story box. It is two rooms deep and has symmetrical windows. The Classical details include pedimented doorways and dentil cornices. But this was too simple for the Victorians, who favored asymmetrical floor plans and lots of period detail—Chippendale fretwork, turned balusters, and Palladian windows. The first Colonial Revival houses were more opulent and fanciful than the real thing.

Later Colonial Revival Houses
By contrast, the Colonial Revival houses that were built between 1915 and 1935 were based on the careful study of Colonial architecture. Thanks to the publication of photographs, drawings, and floor plans, architects developed a deeper understanding of Colonial Georgian.

These principled adaptations were built first in wood and later brick. They often had picturesque anachronisms like bay windows and door sidelights. Another innovation relates to the double-hung sash windows. In the Colonial version, each sash has multi-panes, but in the Colonial Revival version, often only the upper sash has multi-panes and the lower sash has a single pane. Compare, too, the entrances. The broken pediment, which is a common feature of the Colonial Revival style, was rare back in the 18th century.

Advantages and Disadvantages of Newer Technologies
Because Colonial Revival houses were built with machine-made materials they lack the charming irregularities of old Colonial buildings. At the same time, they offer modern conveniences like central heating and electricity.