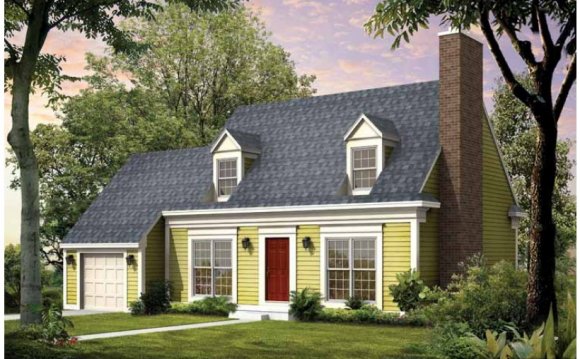 A Cape Cod is a style of house originating in New England in the 17th century. It is a low, broad, frame building, generally a story and a half high, with a moderately steep, pitched roof with end gables, a large central chimney and very little ornamentation. Traditional Cape Cod houses were very simple: symmetrically designed with a central front door surrounded by two multi-paned windows on each side. Homes were designed to withstand the stormy, stark weather of the Cape. Modern Cape Cod architecture still draws from colonial designs.

The Cape Cod style (and in turn its Colonial Revival descendant of the 1930s–50s) originated with the colonists who came from England to New England. They adapted the English Hall and parlor house, using local materials to best protect against New England's notoriously stormy weather. Over the next several generations emerged a 1- to 1 1⁄2-story house with wooden shutters and clapboard or shingle exterior.

The Pilgrims designed houses that provided safety from New England’s extreme winter climate. Temperatures in January and February can drop to -20 degrees Fahrenheit, and multiple-feet snow pile-ups occur frequently. To fight the chill, the Pilgrims built extensive central chimneys and low ceilinged rooms to conserve heat. The steep roof characteristic of New England homes also prevented excessive amounts of snow from accumulating on the house. Fluctuating Cape Cod temperatures presented the problem of moisture within interior walls, which was addressed by using wainscoting: a design element still prevalent today. Finally, the Pilgrims dealt with stormy winds by installing shutters on the windows. A trademark of Cape Cod home design, the shutter is now an aesthetic element instead of a functional one.

Colonial-era Capes were most prevalent in the Northeastern United States and Atlantic Canada. They were made of wood, and covered in wide clapboard or shingles. Most houses were smaller, usually 1, 000–2, 000 square feet in size. Colonial-era Capes did not have dormer windows (unlike revivals). There were generally an odd collection of windows in the gable ends, and in these windows nine and six panes were the most common.

The style has a symmetrical appearance with front door in the center of the house, and a large central chimney for fireplaces in each room. A cape-style house also commonly had a master bedroom on the first floor and an unfinished loft on the second floor. A typical early house had little or no exterior ornamentation, although many built during the Greek Revival featured an entablature with corner pilasters, pedimented gable ends, and a pilaster-and-lintel entry with sidelights.

Although a few late examples of early capes used stud framing, and plank frame was also used, the overwhelming majority of early capes were timber framed, with three bays formed by four bents. The two outboard bays were generally noticeably wider than the central hall bay. This influenced design of smaller versions of the cape.

The first Cape Cod houses fall into four categories: the quarter, half, three-quarter, and full Cape. The comparatively rare quarter cape is a single bay, usually a wider "outside" bay that would become rooms. It has a single door and a single window on the front, but is full depth. The half Cape is two bays, with a door to one side of the house and two windows on one side of the door; the three-quarter Cape has a door with two windows on one side and a single window on the other, while the full Cape consists of a front door in the center of the home, flanked on each side by two windows. Otherwise, the three categories of early Cape Cod houses were nearly identical in layout. Inside the front door, a central staircase led to the small upper level, which consisted of two children’s bedrooms. The lower floor consisted of a hall for daily living (including cooking, dining, and gathering) and the parlor, or master bedroom.

Some use a different naming system, and call the full-size version a "double cape, " but this is used more often for an extended duplex structure.