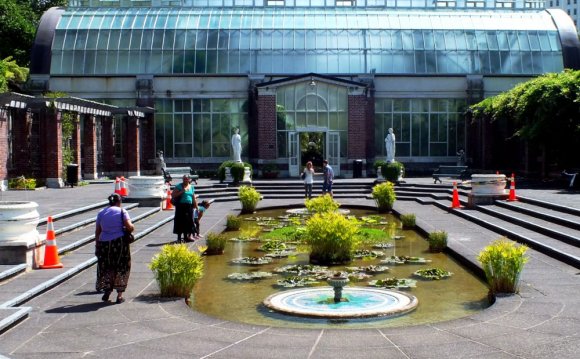 The eclectic Richardsonian Romanesque style is Romanesque Revival architecture named after architect Henry Hobson Richardson. It was inspired by the ancient Romans (1066 – 1200), but it was Richardson’s personal interpretation and adaptation that accounts for the originality and importance of the work. Richardson, born in 1838, left behind a legacy of beautiful buildings, many of which we still enjoy today. Though he only lived to the age of 48, his contribution was so significant that we refer to this specific architectural style as a tribute to his work.

Richardson’s fascination with things medieval influenced his designs; he wanted to evoke a sense of permanence. His recurrent use of stone gave plausibility to that goal. Through particular configuration of proportion, massing, and masonry, the visual weight of his buildings anchored them to earth. Richardson’s designs stressed unique and unusual, sculpted shapes. Architectural historians have actually called Richardson’s style busty and vivacious in reference to the swelling forms and intricate detail of many of his buildings. Although his style was not new, it was innovative in that it brought to American architecture a renewed sense of order and proportion that had become lost in the myriad eclectic styles that were prominent before his style emerged. The fact that his work was copied to such an extent bears witness to this attribute.

Richardson, unlike most other architects of his time, practiced architecture as a fine art. Siegfried Giedion, author of Space, Time and Architecture, contends that Richardson’s study of historical precedence—in this case Romanesque buildings—led to the design of the new forms Richardson was after. The Marshall Field’s Wholesale Store, a landmark structure built in 1885, in the Chicago Loop, is reputed to be Richardson’s finest work. But perhaps his most famous building is Trinity Church in Boston, constructed in 1872 and facing Copley Square. Richardson’s design was the winner in one of the most prestigious architectural competitions of the period. It is more Revivalist than his earlier projects such as the Marshall Field’s Wholesale Store, but it has characteristics of massing and detail that are unique to his work.

The Richardsonian Romanesque architecture stressed intricacy, unusual and sculpted shapes, and individuality. It was a very eclectic style.

Richardsonian Romanesque buildings were always built of solid masonry stone work—stone was the preferred material, although it was often mixed with brick. Solid masonry was used because the masonry veneer method had not yet been perfected in the decades following 1880. Stone buildings, then and now, were more expensive to build than wood buildings in other styles. The stone work was usually square-shaped, called Ashlar, with rough exposed faces, sometimes referred to as rustication. Limestone, granite, and sandstone were often used.

A hipped roof with lower cross gables was often used. There were also many large square masses capped by a hip roof (smaller gable roofs were placed at the sides and front, which intersected the larger hip roof). The last basic building form, most familiar in Washington, DC today, was the townhouse. For townhouses, mansard roofs and front gabled roofs were normally used. Many Romanesque style buildings also had round or polygonal towers. Tower roofs were usually conical or pyramidal. The eclectic nature of the Richardsonian Romanesque style also generated other roof forms, such as a side-gabled, cross-gabled, and more.

Wide-rounded arches were a key feature of the style and were used around doors and windows. The nature of the design required that the arch be a true semi-circle, not pointed or a low-spring arch other styles incorporated. Romanesque arches typically rested on short columns that were either free standing or incorporated into the wall surface. Decorative windows and doorways frequently had arched tops and small columns (colonnettes) on each side. Often, three or more arched windows were grouped together. Windows were recessed deeply into the masonry and had one large pane of glass per sash.

Many doorways had arched tops and small columns (colonnettes) on each side, and brick was often arranged in interesting patterns to enhance entryways. To further embellish the façade, decorative patterns were incised into the stone lintels and trim.