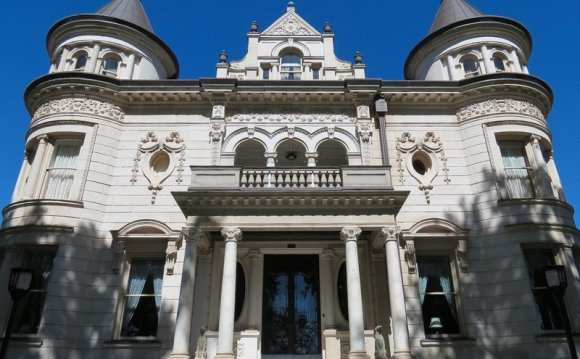 The main feature on the Stanford Campus is the Quad, home to various departments as well as Memorial Church. With its arches, red-tile roof style, and use of sandstone, the Quad is reminiscent of early Spanish missions, but with details characterized as Richardsonian Romanesque (named after the architect Henry Richardson).

The Green Library was built decades later. However, the sandstone mine in the Palo Alto area began to diminish. The Stanfords were unable to develop an entire library of sandstone due to its growing scarcity. In order to continue with the overall image and coherence of the campus, a sandstone façade was built with sandstone colored brick making up all but the main entrance of the library. The design, and not only the material, of Green Library is distinctive of its age since its multiple arches and ornate human sculptures present a mixture of Art Deco and Beaux Art, the leading architecture style from 1895-1925 .

As sandstone grew even sparser and the effects of the Great Depression began to sink in, the School of Education (Cubberly) had to be constructed with a sandstone painted stucco exterior and a simplistic, stone entrance. This minimalist style reflects the poverty of the era.

The modern architecture of buildings carried over to Hoover Tower—a tall, minimalist bell tower with hints of Art Deco (zigzag designs and four minor towers on the corners).