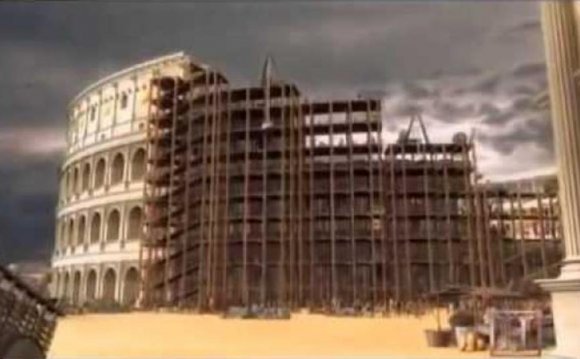 The Romans were excellent engineers and builders. Many of the buildings and engineering projects they designed are still around today and some are still being used. Here are some of the projects that the Romans excelled in:

Roman Roads were important to the economy and the military of the Romans. They allowed for easier commerce between towns and cities and also allowed the Roman Legions to move quickly around the expanding empire.

The roads were designed to last despite the environment. They were built using many layers of masonry including concrete. These durable roads are still used today. They were also built with a hump making water flow to the edges. This kept the roads from flooding and allowed them to be used in rainy weather.

The Colosseum in Rome is a great example of Roman engineering and construction. The Colosseum was a large outdoor stadium that could seat around 50, 000 people for various forms of entertainment such as gladiator games, mock battles, and dramas. The huge Colosseum is free standing and built with multiple arches to give it strength. Much of it still stands today, although earthquakes have knocked portions of it down. It is 615 feet long and 510 feet wide and took around 131, 000 cubic yards of stone to make.

Aqueducts were long channels that the Romans built to carry water into the cities. Many of the Roman aqueducts were below ground. The water that was carried into the cities was used for drinking water, baths, and sewers. It was generally carried to a public fountain where people could then use buckets to get their water. Roman plumbing became so advanced that many of the large wealthy houses had running water.

The Romans built long durable bridges. Many of their bridges still stand today. They used stone and concrete to build their bridges and used the arch as the basic architectural feature to make them strong. The largest Roman bridge ever built was the Trajan bridge over the river Danube. It was over 3700 feet long and 62 feet high.

Roman engineering had a large influence on Roman architecture. Arches were used a lot due to their strength. The Romans also used domes as they enabled them to build large ceilings with wide open spaces.

Engineering an Empire - Rome 1of10