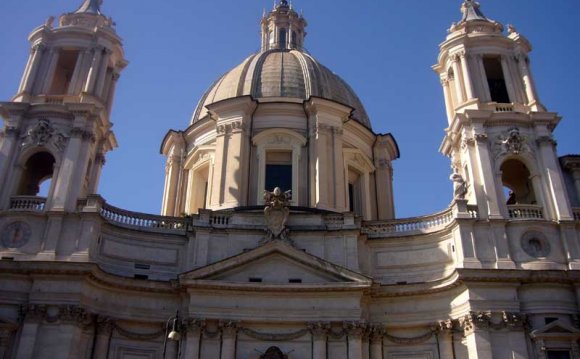 The area of the Forum was originally a grassy wetland of approximately 250 x 170 metres between the Palatine and Capitoline Hill. As more people began to settle in the area during the 7th century BC a large covered sewer system was constructed in order to drain the area into the River Tiber. In time it developed into an open air market near the Comitium (a place of political and judicial activities). Over the years a number of buildings were constructed and in 600 BC the area was paved. This was the first forum and was considered ancient Rome's city centre. As Rome's population increased, the forum became too small and in 46 BC Julius Caesar built a new one, setting a precedent that was followed by successive emperors including Augustus and Trajan whose forums are adjacent to this one, although a main road separates them and partly covers some of the ruin, work that was carried out by Mussolini in the 1930s.

The forum was initially a market-place that was also used for festivals and for conducting business. Over time, many of the traditions from the Comitium such as the popular assemblies, funerals of the nobility and games were transferred to the Forum. All the important buildings of Rome were located in or near this area. These include the royal residency of the Regia and the complex of the Vestal Virgins. The Senate House, government offices, Tribunals, religious monuments, memorials and statues could all be found there. Eventually the judicial offices and the senate itself moved from the Comitium to the Forum, which became the city square and the economic and political hub of the Roman Empire. As with many ancient buildings, a great deal of the building material has been removed from the Forum to be used elsewhere, so apart from a few buildings and the arches of Titus (opposite the Colosseum) and Septimius Severus only columns and stone blocks remain.

When visiting the Forum, the first building to be seen on entry is the Temple of Antonious and Fustina situated on the left as you walk in. This temple was begun in 141 AD by the Emperor Antoninus Pius, and was initially dedicated to his deceased wife, Faustina. After Antoninus Pius died in 161 AD, his successor, Marcus Aurelius, re-dedicated the temple jointly to Antoninus and Faustina. The building with its ten monolithic Corinthian columns 17 metres tall stands on a high platform of large blocks. The deep grooves in the temple's columns are the result of a medieval attempt to dismantle the pillared portico: The cords burnt into the columns, they resisted and remained intact. Converted to the church of San Lorenzo in Miranda, in the 7th century it was rebuilt in 1601.

On the right of the entrance next to the Temple of Antonious and Fustina is the Basilica Aemilia. Very little remains of the basilica due to the materials being removed in the Middle Ages and the Renaissance although the floor plan is still discernable showing a rectangular plan 70 × 29 metres which is divided in four naves, the main one being 12 metres wide. The basilica was destroyed and rebuilt on a number of occasions; the first complete reconstruction took place between 55 BC and 34 BC, which included a series of shops used by bankers and money changers. The building was destroyed by fire in 14 BC and rebuilt by Augustus, the ruins of this building can be seen today. Next to the Basilica on the main triumphal route known as the Sacred Way, which led to Capitol Hill and the Temple of Jupiter is the Arch of Severus. This was erected by the Senate in 203 AD on the tenth anniversary of the emperor's accession. It commemorates Roman victories over the Goths and Vandals and his defeat of the Parthians (Persians) in 198 AD. The arch is made of travertine and marble with reliefs showing the Roman Army departing on the campaign and decisive battles in the wars.

The Senate House or Curia was moved to its present location just past the Arch of Severus in 53 BC by Julius Caesar after the previous building was destroyed by fire an occurrence that happened on four occasions. The current building, constructed in 283 AD by Diocletius, consists of a great hall, 25.2 x 17.6 metres with a height of 31.6 meters. Still visible is the original marble floor made out of Egyptian marble and the tiers that held the seats of the senators. In the 7th century it was turned into a church which it remained until 1937, when the interior was removed and the original interior restored, it now hold items and statues.

Just behind the Arch of Severus is the Temple of Concord, this was the main temple in ancient Rome, dedicated to the goddess Concordia. Believed to have been originally built in 367 BC, it was restored during the reign of Augustus by Tiberius. Measuring 45 x 23 meters its design is unusual in that it has its facade on the long side, this was due to the ground configuration and to it being built directly against the wall of the Tabularium which provided a backdrop to the Forum and masks the slope of the Capitoline Hill.

Adjacent to the Temple of Concord is the Temple dedicated to the Vespasian and his son, Titus. It was begun by Titus in 80 AD after Vespasian's death, and was completed by Domitian, Tituss brother, in 87 AD who dedicated the temple to Vespasian and Titus. Like the Temple of Concord it too was restricted by space and measures 22 x 22 metres. All that survives today are three Corinthian columns at the south-east corner, the podium's core and some fragments of the wall.

The Temple of Saturn was built during the last years of the Etruscan kingdom and was inaugurated at the beginning of the republic in 497 BC. The existing ruins come from the third Temple which dates from 42 BC, the second one being destroyed by fire in 283 BC. Although dedicated to the god Saturn, the temple's chief use was as the treasury of the Roman Empire, storing the Empire's reserves of gold and silver. It also served as the state archives and held the official scales for the weighing of metals, the bronze tablets on which the law was inscribed and the banners of the legions and the senatorial decrees. Just in front of the temple is an early twentieth-century restoration of the Rostra. This was a speaker's platform completed by Augustus in 42 BC where Politicians would address the crowd. In 20 BC the Milliarum Aureum column was placed in front of the temple and all distances to Rome were measured from that column. Building Rome in a Day - Inhale/Exhale