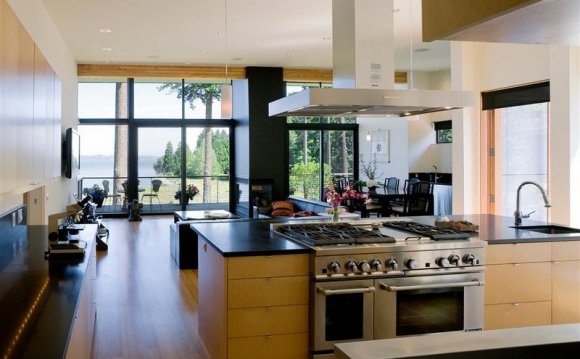 Architect Pietro Belluschi was internationally celebrated during his lifetime for designing skyscrapers, churches with steeples that pierced the clouds and glass-walled homes perched on top of hills. Few people know, however, that the man who shaped Portland’s towering skyline outfitted a tiny teahouse in the backyard of his last residence.

A newer wood-and-glass incarnation of the original tiny house sits across a courtyard from the 1948 Burkes-Belluschi House that he designed in Portland’s West Hills. Two generations of architects – Pietro Belluschi and his son, Anthony – can now lay claim to minimal dwellings in this same spot, built before the term "tiny house" was well known.

Both the private main house and new teahouse will be open May 10 to people who have purchased tickets to Restore Oregon’s Mid-Century Modern Home Tour Celebrating Pietro Belluschi. All of the Belluschi homes, whether large or small, showcase his admiration of Asian, Scandinavian and Italian design, and a Zen-like sense of balance.

Anthony Belluschi received Restore Oregon’s 2013 DeMuro Award for preserving, restoring and expanding the meticulously engineered and crafted Burkes-Belluschi House and for the design and execution of this new teahouse.

The history of the tiny house almost spans a century.

In 1944, Dr. and Mrs. D.C. Burkes hired Pietro Belluschi to design a Pacific Northwest-style mid-century modern on a mostly vacant lot at the end of a ridge. In the back of the property was an old garden shed that the owners wanted to keep.

To make the rustic structure visually compatible with the new house, Belluschi added cedar siding and a small, overhanging trellis. Mrs. Burkes used the upgraded structure as a place to meditate and she called it a teahouse.

After Pietro Belluschi and his wife, Marjorie, bought the property in 1973, he added a shower stall, a sink and toilet to the tiny house. Before he passed away at 94 in 1994, he spent time here, taking a nap, drafting and looking at his architecture plans, prints and papers that he stored here.

By 2008, the aging outbuilding had lost its usefulness. It was in danger of collapsing, the water had long been cut off because its sewer pipes had been punctured and it was packed with garden equipment and infested with bugs.

People with tickets ($45) to the self-guided, self-paced tour can see six of Belluschi-designed Portland area houses that span several decades. Tickets are limited and are available at or by calling 503-243-1923.That year, Belluschi son, architect Anthony Belluschi, replaced the forlorn structure with an elegant, multifunctional guest suite and studio.

Although limited in size – 236 square feet – this is the house Anthony and his wife, Marti, stayed in when they came from Chicago to visit. They also lived here for 18 months as they oversaw the careful restoration and addition to the original main house, where they now live.

Anthony’s teahouse sits on the one part he could salvage from the original: a corner of the concrete foundation.

Inside, there are three carefully defined sections that are separated by sliding shoji screen pocket doors.

The front door leads to the entry hall with a coat closet at the end.

The main room to the left serves as the bedroom, living room, dining room and study for reading or drafting.

To the right of the hall is a narrow one-sink “kitch-bath, ” a word Anthony Belluschi invented to describe his clever combination of a kitchen, bathroom and changing room. One side of the room is a fully stocked kitchen; the other side – without a divider – is the bathroom counter, toilet and shower.

Furniture, too, has many uses. There is a sofa bed, a stool used as a ladder to reach the blankets stored over the shower and a compact table that expands to become a dining table.

A sense of spaciousness comes from the high ceilings and clerestory windows that frame treetops. Louvered and screened air vents provide eco-friendly cooling.

By design, the new teahouse harmonizes with the main house, courtyard, Japanese-inspired landscape and surrounding forest.

Says Marti Belluschi, “The pleasure of living in small places – particularly when simplicity is the style and the building materials reflect a sense of calm, warmth and beauty – is peace.”