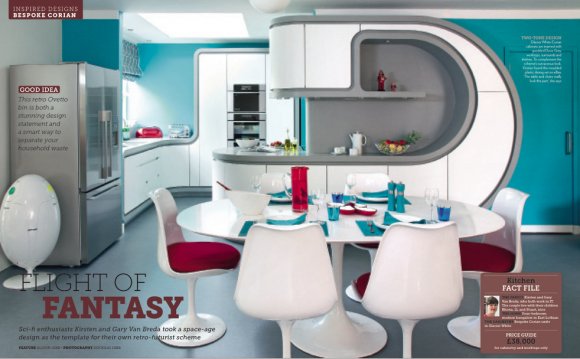 During the 1950s, architecture, cars, and gadget design took on a curiously spaceflight-inspired aesthetic. Manufacturers built vehicles with ornamental tailfins. Upswept roofs and parabolas cropped up on buildings. Logos incorporated starbursts and satellite shapes, while parallelograms, wings, and free-form boomerangs became the motel sign shapes du jour. In retrospect, those designs look a little gimmicky, but they nonetheless reflect a collective 1950s confidence about America's dazzling future as a leader in space flight and economic prosperity.

While historians generally date the Space Age back to Sputnik's launch in 1957, our captivation with space travel began much earlier. Comic books, TV programs, and furniture borrowed components from science fiction, while businesses lured customers by incorporating futuristic elements in their buildings. The trendiness of the aesthetic both stimulated and exploited our enthusiasm for the future, culminating into a quick turnover for consumer products and a greater movement toward materialism.

Plenty of Space Age buildings might have already been demolished (because let's face it, populuxe hasn't aged very well), but it's almost impossible to avoid the so-called Googie motif in our archives. How could we not cover the era with gusto, being a science magazine and all? Our gallery begins in 1951, where we published the dream car designs of Ford employees. All looked as if they were half-rocket, half car; unfortunately, none made it to the production line. On a happier note, swivel-mounted television sets gave living rooms a Jetsons-like quality, oval picturephones debuted in New York, and esteemed Googie architect John Lautner built his octagonal Chemosphere above the San Fernando Valley.